Since the previous reviews offered goose skin and dripping blood, it’s time to relax a bit now. The next Toronto shot movies will be pure comedies. 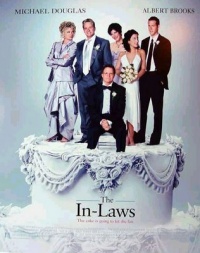 The In-Laws (2002) This movie is reckless and relaxing as an evening cotail. Easy story about future fathers-in-law Steve Tobias and Jerry Peyser, one of them adventurous CIA operative, the second one peaceful pediatrist, may sound familiar. Continuing the general trend, this is another remake of successful comedy from seventies. The roles of two completely different guys who have to cooperate for the their children were taken by Albert Brooks and Michael Douglas. Both obviously enjoyed making this movie and invite us on a crazy humorous ride with spies, smugglers and a submarine. The rest of the cast backs them more than well, especially David Suchet (famous as Hercule Poirot) will make you laugh not only once.

The story takes place on various locations, most of them were shot here in Ontario. Northern France was actually Northern Ontario (Kawarthas resort) and Cambridge pretended to be in Eastern Europe. Speaking about Toronto itself, the movie wedding site can be recognized as the exclusive Lake Boulevard shoreline, you can see the Hamilton Airport and Warplane Museum, and some of the busiest intersections.

You can’t expect much, actually you can expect anything except light fun from this movie. Some of you may be nostalgic about the old movie (starring another great detective, Peter Falk), but this remake still represents a decent refreshment of this archaic plot. 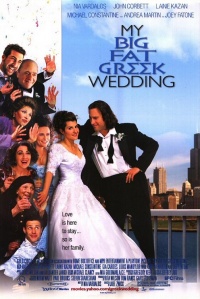 My Big Fat Greek Wedding (2002) This seems like movie made by Greeks for Greeks, but everybody can have a lot of fun. Toula Portokalos is 30 and single. Her family believes it’s time for a wedding, but of course, the groom has to be Greek. But you know that love usually turns all things upside-down.

This movie is mainly about the Greek mentality; conservative, a bit crazy, but always warm-hearted and emotional. If you have ever been to Greece or you know the local Greek community, you can imagine the main gags.

Toronto is Chicago once more (however, Toula is said to be from Canada) and more than big landmarks you can seek for small cameos from various neighbourhoods. The church is made of Holy Trinity Russian Orthodox Church (exterior) and St. Nicholas Ukranian Church (interiors), you can recognize some of the more or less Greek places like The Ellas or Pappas Grill. Some shots were made in Cabbagetown and Simcoe Street.

Not very known cast (beginning from comedy director Joel Zwick to the main actors Jon Corbet, Michael Constantine and Nia Vardalos, who is the scriptwriter as well) backed by producer Tom Hanks managed to deliver very nice simple funny romance, loved especially by women. With all the teenage comedies around, this movie is like small, but shiny star on the sky. 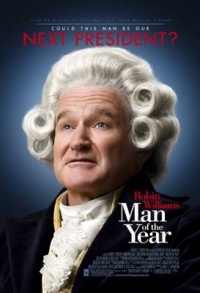 Man of the Year

Man of the Year (2006) When Robin Williams, Jeff Goldblum and Christopher Walken meet on the same stage, you can feel something is in the air.

Comedian Tom Hobbs (Williams) is a comedian, who runs for for President of the US and surprisingly – he wins. All due to mistake in voting software which is kept as a secret by the executives of software company. One of the their employees, Eleanor, tries to reveal the secret to public, chased by the company’s agents.

Williams and Walken are veterans, who know their jobs very well. Especially the first half of the movie reminds Williams’ best sarcastic flicks. Unfortunately, the script later slightly slips into moralities and preachments, turning this movie into Average Robin Williams Comedy. But it still means better than average movie.

Toronto serves as a scene of busy American city, where business and politics play their roles – so typical for American production coming to our town. Massey Hall, Harbourfront or CBC Broadcast Centre witnessed this movie creation.