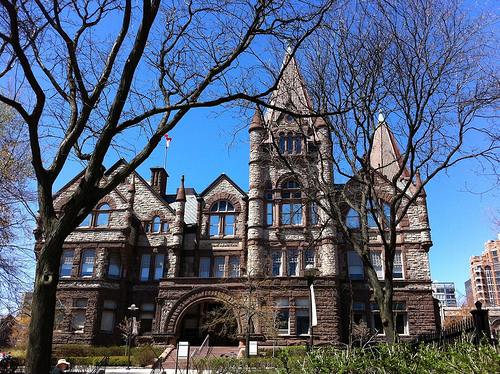 Victoria College
by B Sutherland

One of Canada's foremost literary theorists and critics, Herman Northrop Frye was born on July 1912, in Sherbrooke, Quebec, to Catherine Maud Howard and Herman Edward Frye. In 1929, he entered Victoria College in the University of Toronto, and it was here, as a graduate student in 1947, that Frye first gained wide acclaim with Fearful Symmetry: A Study of William Blake.

This was followed by Anatomy of Criticism in 1957, and The Great Code, a two-volume exploration of the Bible's influence on Western literature, in 1982. Frye taught English at Victoria College for over twenty years, became Chancellor of Victoria College in 1978, and was appointed Harvard's Charles Eliot Norton Professor of Poetry from 1974-1975. He wrote over twenty books and edited fifteen, wrote numerous articles and reviews, lectured in universities around the world, and received thirty-eight honorary doctorates. He was made a Companion of the Order of Canada in 1972, won the Governor General's Literary Award for Non-Fiction in 1987, and collected many more honours and awards before his death on January 23, 1991.

Although the idea was contested during his lifetime, Frye held that literary criticism was as complete and sound an area of study as philosophy or linguistics and held the potential to deeply analyze a work as opposed to merely judging it 'bad' or 'good.' Central to his perspective on literature was Frye's emphasis on symbols and archetypes, making him an important contributor to archetypal criticism. Among the lasting tributes to Northrop Frye are the Victoria College's Northrop Frye centre and the international Frye Festival for literature, held every spring in Moncton, New Brunswick.