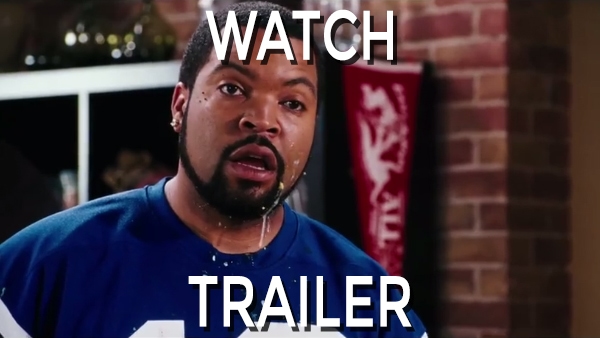 If you've ever seen one of Ice Cube's films before, you know what to expect when sitting down to watch ARE WE DONE YET? Delinquent behaviour, silliness galore, a touch of potty humour and lots of rap music. Well, we can't fault Ice Cube for the latter since he was one of the biggest rappers of the 1990s, but the kind of humour found in his films is quickly becoming stale now, and his hijinks don't seem as funny as they did back when I was growing up in the 90s grunge era. 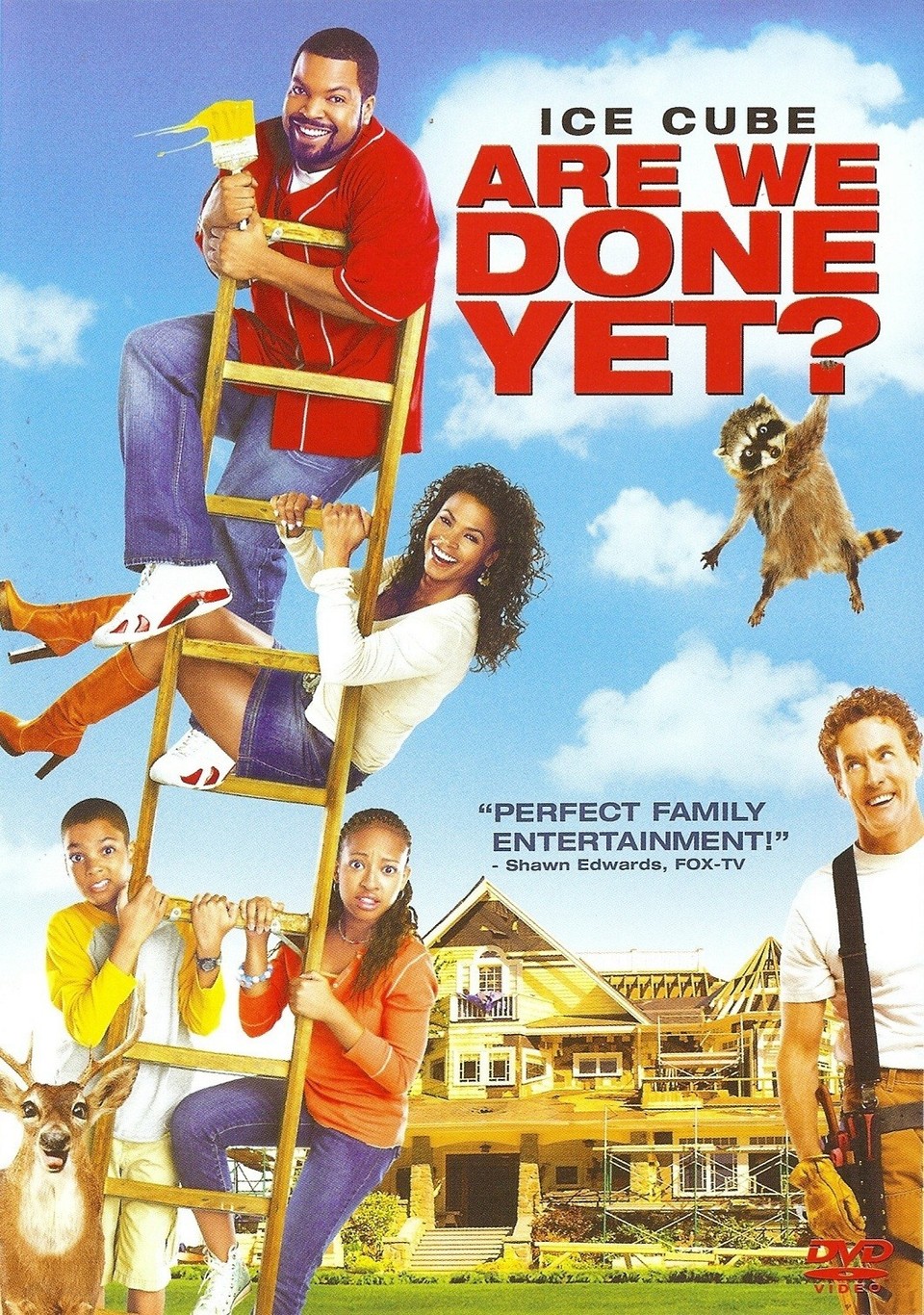 ARE WE DONE YET? is a sequel to the 2005 comedy ARE WE THERE YET? and some Hollywood execs even claim that it is a remake of the classic MR. BLANDINGS BUILDS HIS DREAM HOUSE (1948) which we have reviewed here in the past. Personally, I find that a little hard to swallow but there are definite signs of this modern comedy being influenced by the likes of the beloved classic Hollywood film starring Cary Grant and Myrna Loy. I think it's just incredibly difficult for me to wrap my head around the fact that movie audiences have been told to expect comparisons between this film and its classic predecessor.

Produced by Revolution Studios, RKO Pictures, and Cube Vision, ARE WE DONE YET? starts where ARE WE THERE YET? left off: Nicholas "Nick" Persons (Ice Cube) has married Suzanne Kingston (Nia Long) and together with her two children – Lindsey (Aleisha Allen) and Kevin (Philip Daniel Bolden) - have moved into Nick's small, compact apartment. Chaos (and a whole lotta mess) ensues when the four of them try to navigate their way through the tight hallways and diminutive rooms of Nick's former bachelor abode. Milk is spilled and eggs go flying and when Suzanne reveals that she is pregnant, and expecting twins no less, Nick makes the executive decision to move the family out and into a larger home. 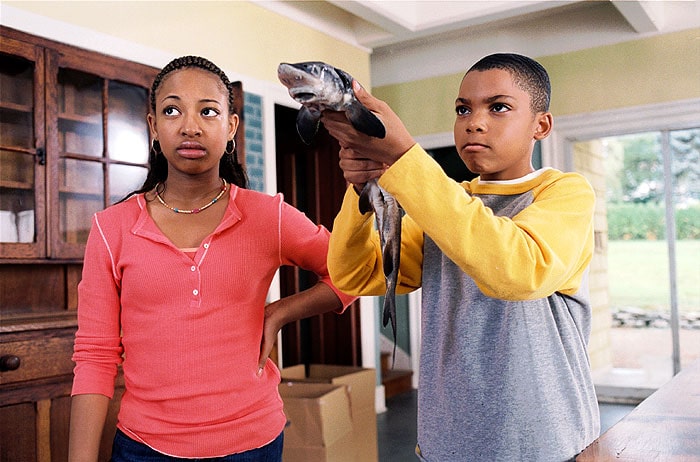 Suzanne, Lindsey, and Kevin are not impressed when the search for a new home leads them into the countryside. Nick waxes lyrical about the clean, fresh air, the serenity of the landscape and the wide open spaces and tries to convince his wife and stepchildren that moving into rural Oregon is the best choice for them – until he comes face to face with a deer and then it's every man for himself! They somewhat reluctantly set their sights on an outwardly beautiful historic home built in 1889 and consider buying the property from real estate agent Chuck Mitchell Jr (John C. McGinley).

Chuck describes the property as a "fixer-upper" and rightfully so because it seems that everything the Persons touch either crumbles into little tiny pieces or savagely tears apart with no warning whatsoever. When Suzanne expresses concern over the dilapidated structure, Nick insists that he is perfectly capable of renovating the home himself and fixing any little problems that crop up. I can pretty much guarantee that you're sitting there, reading this review and shaking your head in disbelief right about now. Believe me, so am I. 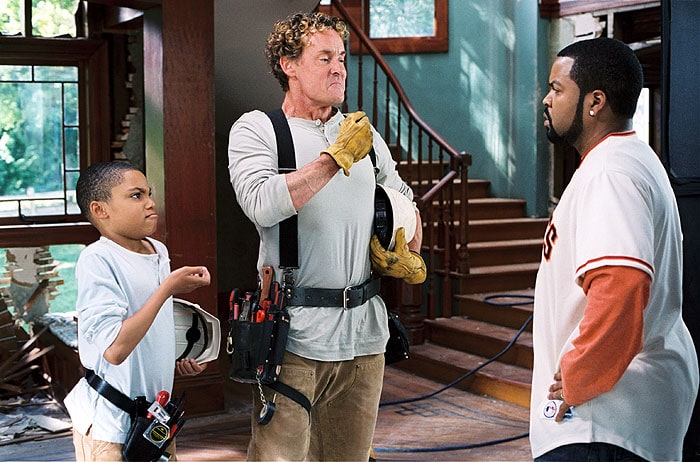 Realtor Chuck wins himself a sale and the Persons move in (albeit grudgingly). Now that the family is based in the country, it's time for Nick to introduce his wife and stepchildren to the beautiful outdoors. He takes them on fishing and canoe trips, quiet walks through the wilderness, and jaunts across open trails reminiscent of the open plains of the English countryside. Nick obviously wants the best for his new family and tries really hard to help them all adapt to their new surroundings, but at every turn they encounter one obstacle after another. If they're not being attacked by a shark-like fish, their house's electrical wiring is blowing up. If they're not being chased by a swarm of bats, they're falling through holes in the floor and muddy trenches in the ground.

Admitting defeat and at the behest of his wife, Nick calls in the local contractor who happens to be realtor Chuck (he wears both hats apparently). Chuck quickly gets to work and upon his initial inspection proclaims that the home's issues go a lot deeper than his original diagnosis of it being a simple "fixer-upper." Needless to say, Nick is not impressed especially when he re-enters his home and finds it nearly gutted soon after Chuck's arrival. Frustrated and emasculated, Nick takes out his anger on his expectant wife and stepchildren, not to mention realtor/contractor Chuck whom Nick swiftly fires. To add more fuel to the fire, daughter Lindsey sneaks out of the house one night to go to a party and when she gets caught, Nick grounds her which further provokes the ire of pregnant Suzanne. 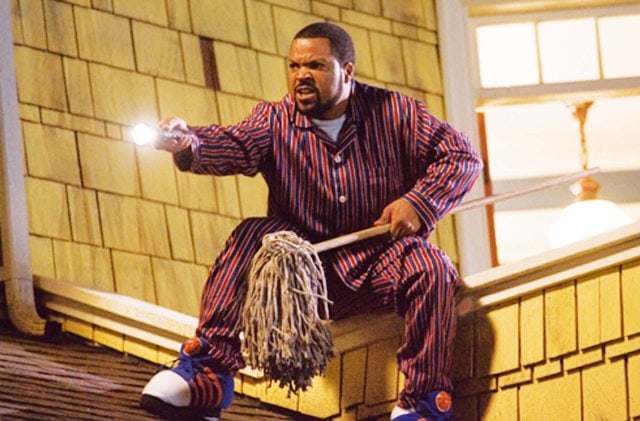 As with all family comedies, it's pretty much inevitable when the husband and wife clash and the situation is brought to a head; in this case, Suzanne takes the children and moves into the guesthouse, away from her frustrated spouse. Unfortunately, the stress of the situation and her already fragile condition culminate into labour pains – looks like the twin babies are on the way! Turns out the nearest hospital is an hour away so Nick and Lindsey are stuck having to deliver the infants themselves. In comes Chuck and it's a full house of frantic, panicked people. Oh joy!

Fast forward to six months later and we see the Persons and their friends (including Chuck) enjoying a big barbeque in the home's backyard. The house has been renovated, the Persons family is living together again, and everyone's happy – just in time for the film's animated end credits to roll. How charming! Except that it's not. The whole film seems juvenile and horribly contrived. Ice Cube is not the world's greatest actor and the majority of his scenes come off brusque and lacking in true wit and realness. The supporting cast is all right but still don't lend enough support to the storyline and, because of this, the audience doesn't take the film seriously. Yes, it's billed as a comedy, but I honestly didn't laugh once and it was due mostly to the cast's poor performances and deficient humour (if you can even call it humour). 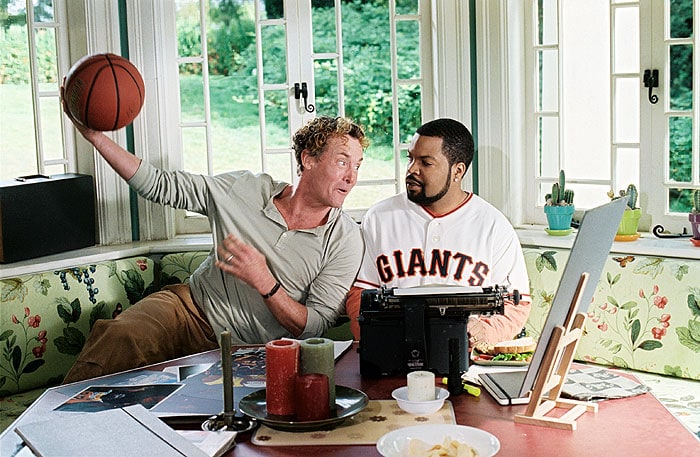 This movie's only saving grace is that it teaches its audience a valuable lesson: a home inspection is definitely something that should never be overlooked! If the Persons in ARE WE DONE YET? had had the countryside property inspected before purchasing the home, they probably would have decided to back away and leave the timeworn structure to another home buyer. Ask any realtor or contractor and they will tell you that the home inspection is often the sole deciding factor when it comes to making a sale. If the house fails, it's pretty much guaranteed not to sell.

If you're an overzealous home buyer, I cannot stress enough how important it is for you not to make a hasty decision that could very well backfire on you once you assume ownership of the property. Clear your head and really take into account how vital a home inspection's results are before committing to anything! It'll save you and your loved ones a whole lot of headaches, believe me. Weigh all of your options and if the home you are set on buying doesn't come up smelling like roses, walk away and know that the perfect property for you is still out there. Don't lose hope!