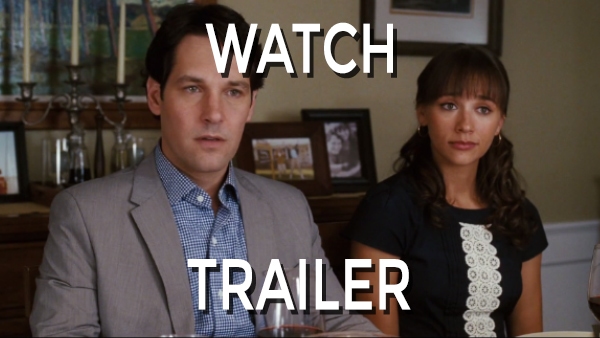 With films like Glengarry Glen Ross and American Beauty portraying realtors as either money-hungry or focused on success rather than making a difference in their clients' lives, it's refreshing to see Paul Rudd's representation in I Love You, Man. Rudd plays kind, considerate, and lovable realtor Peter Klaven. At the beginning of the movie, Peter is very excited to have just become engaged to his amazing girlfriend, Zooey Rice (Rashida Jones). But that excitement slowly turns to concern as he realizes that his getting along so well with the women in his life has led to his having no male friends. Determined not to have no one on his side of the wedding party while his bride-to-be has six bridesmaids and a maid of honour, he starts the hunt for his best man. A few less-than-stellar meetings later, he fortuitously runs into the always-straightforward Sydney Fife (Jason Segel) at one of his open houses. 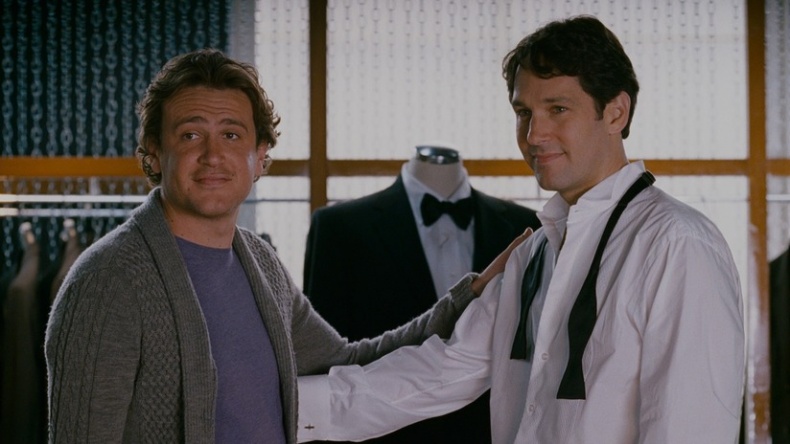 One of the cleverest ongoing jokes throughout the film is the innuendo that arises as Peter struggles to find a best friend â which really isn't all that different from trying to find a partner. He goes on "dates," gets nervous about calling them, fears he'll never find "the one" â it's all very subtle and smart and it accents the whole movie. Not only is this tactic incredibly humorous, but it also illuminates the fact that having a great best friend can be every bit as life-changing as finding the right partner. While Peter's often awkward and unsure of himself, Segel brings his usual bold, brash charm to the role of Sydney. Once again, the old saying "opposites attract" proves true as these two men hit it off and become far better people together than they were apart. This clever twist on the typical romantic comedy genre makes room for a "bro-mantic" comedy. It's a brilliant new genre that we would be happy to see more of!

We should mention that although I Love you, Man definitely shouldn't be considered a "dumb comedy" â the writing is clever and the actors are smart, subtle, and undeniably talented â it does have its more low-brow moments. The film has its fair share of dirty jokes and references to sexually explicit material. If you don't find this kind of humour entertaining, this may not be the best movie for you. 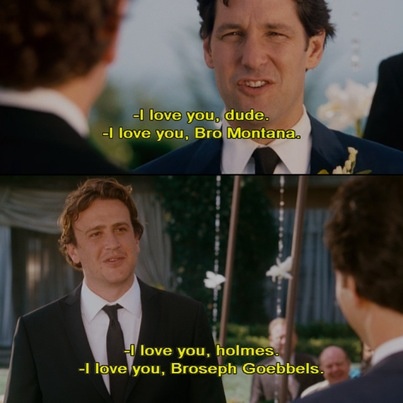 While much of Sydney's humour comes from the dirtier side of comedy, Rudd's portrayal of the awkward but lovable Peter is completely clean and incredibly endearing. Peter constantly wants to seem cool and put together â which always ends in his saying the most ridiculous things. And as silly as the awkward phrases may be, the way he says them makes them irresistible. In fact, we challenge you not to say "totes m'gotes" instead of "totally" in the days after seeing this movie. He just makes it seem like so much fun!

Although Peter may not have always balanced his male and female relationships very well, he sure has managed to achieve a good work-life balance. He has dreams in both his personal and professional lives, and he gives them both the attention they need. When we first meet him, he's getting ready to get engaged and he also has plans for a new development project that has been a dream of his for a while. He even merges those two hopes by proposing on the site of his dream project! Characters in comedies can often feel a little one-dimensional, so it's nice to see a character with real hopes, dreams, and concerns.

Other than planning the wedding, one of the bigger stressors for Rudd's character in the film is he's trying to sell Lou Ferrigno's house. (Yes, that Lou Ferrigno. "The Hulk" even makes a guest appearance!) He's having trouble doing so, though, because, as Sydney points out to him, "You have all the skills in the world but you have no confidence." We can completely relate to this. With any job, you may have the natural skills and the necessary training required to do it effectively, but it can still be hard to always believe in yourself. Fortunately, with great supports like his fiancÃ©e, Zooey, and his new friend, Sydney, Peter manages to get the extra confidence boost necessary to find his way and become the great, funny, charismatic, caring realtor he was born to be. It just goes to show that it's great to want to become a success professionally, but the value of a support system can't be underestimated. 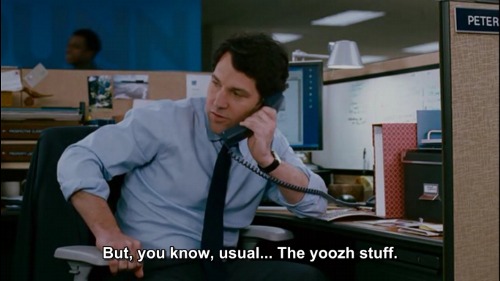 Now, if you want an example of a less desirable realtor, you need only look at Peter's coworker, Tevan Downey. Tevan is obnoxious, overly confident, grossly sexual, and somehow equates having your face printed on a urinal cake with success. We strongly disagree. Being a great realtor isn't about how many houses you sell, how many people know your name, or how much money you make. It's about caring about the people in your life â your family, your friends, and your clients. You get the feeling that Tevan's character would sell you a house with mold issues and a termite infestation that secretly sits atop a subway line for an exorbitant amount of money if he could get away with it. But Peter never would. And thank goodness for that! It's so nice to see portrayals of realtors like Peter who are honest, hard-working, and all around great people â and it's extra fun to see him grow personally and professionally over the course of the film. It's great seeing realtors portrayed on-screen that we would actually love to meet and work with in real life. Here's hoping we'll see more characters like I Love You, Man's Peter Klaven!