Farrell is Douglas Quaid, one of thousands of faceless workers toiling away building robots in a factory of the fairly near future. Feeling restless and plagued by nightmares, Quaid visits Rekall, a company that implants memories of fantastic, unattainable experiences into the brains of its customers. Quaid chooses to get some memories of being a secret agent, but when the procedure appears to go wrong, and he manages to kill or allude all of the police who are suddenly chasing him, he spends the rest of the movie trying to figure out if this is all his Rekall spy fantasy, or if he really is an agent so deeply undercover that all of his memories have been erased.

This is a rather fun idea, and would have made for a good movie – except that for some reason, everyone's too busy dashing about and shooting things to show any personality or complex emotion (well, Farrell and Biel get to shoot actual bad guys. Their pursuers are only allowed to hit inanimate objects and the odd civilian). Quaid almost interacts in a pleasant and believable fashion with his wife (or is she?) Lori at the beginning, but it doesn't last – soon enough, he's on the run, and she's morphed into a determined and indestructible terminator. 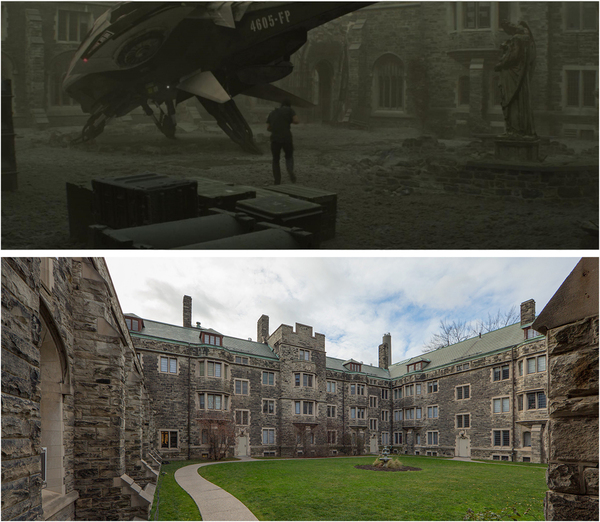 The courtyard of Knox College. As you can see on the photo above, the futuristic aeromobiles are usually parked elsewhere.

On the subject of terminators. This is not the first time that poor Douglas Quaid has run around chasing after his memories. The original Total Recall came out in 1990, directed by Paul Verhoeven and starring the Terminator himself, Arnold Schwarzenegger. I'm not going to spend much space comparing the two, except to say that the old movie has more whimsy, gore, profanity, and humour, but it isn't appreciably better. While it doesn't suffer from final fight fatigue quite as badly as the new version, and the action sequences in general are much shorter than their bloated 2012 counterparts, none of the major characters are at all detailed or interesting, and the ending is simply ridiculous. It should also go without saying that the dialogue in the 2012 version – while mostly gray and flavourless – is still better than the original (unless you've a particular hankering for ol' Arnie's deliberate delivery and dreadful one-liners), and the acting is undoubtedly much better. Although, since no one is called upon to do much with it, this last advantage is negligible. 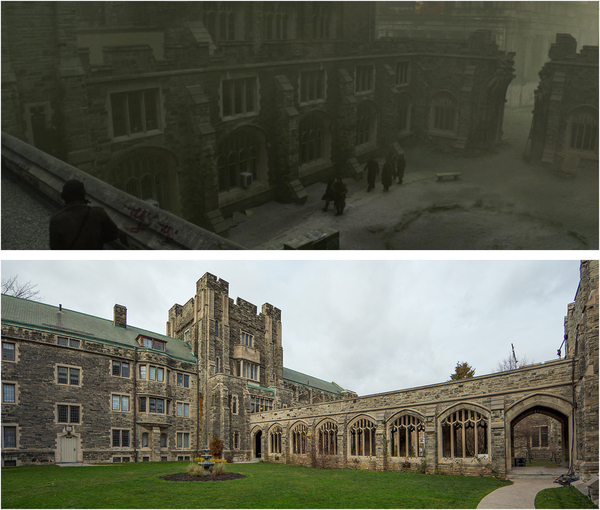 In the movie, the courtyard and the structures around are quite damaged. In reality, it's a nice peaceful place.

I could forgive a few of Total Recall's failings if it really was a good brain-teaser that left me trying to figure out which parts of it were 'real' and which were just a Rekall dream. This is one of the most praised aspects of the original, but I can't even tell if Wiseman and co. were trying to duplicate this mystery or not, because they failed so spectacularly. The problem is this: if we are to seriously entertain the notion that all of the excitement and intrigue exists only in Quaid's head, then we should see everything from his perspective alone. We certainly shouldn't be seeing scenes of said intrigue in which Quaid isn't even present. But we do see them – from a fairly early point in the film – which makes the whole 'Quaid is just dreaming' possibility seems pretty well impossible.

In the interest of fairness, I should note here that similar Quaid-free sequences were present in the Verhoeven version as well, and yet the film was still lauded for its mind-bending qualities. Allegedly, Sharon Stone (1990 Lori) couldn't figure out whether or not she was really married to Quaid, while the DVD commentary includes Verhoeven and Schwarzenegger disagreeing about what parts of the movie were real . So perhaps I'm just being overly picky with a film convention. 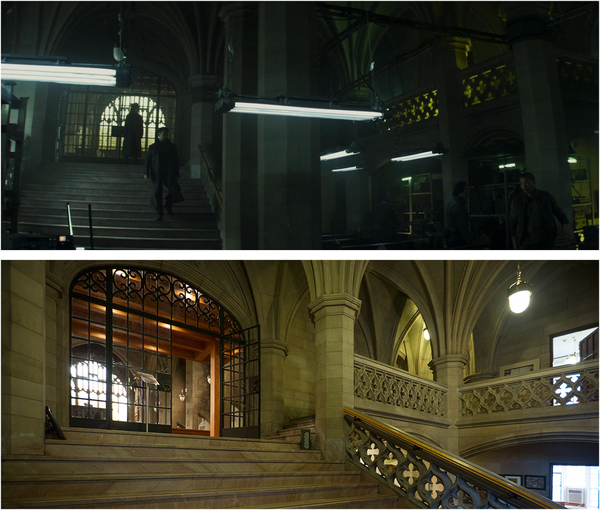 Notice how the cold neon lights in the movie change otherwise warm and kind of Hogwartish atmosphere of the hall.

Does the Total Recall 2012 do anything right at all? Yes. It looks pretty good. There are flying cars, subway commuting taken to its logical extreme (that is, straight through the planet), and the chaotic, futuristic Asian Venice which Quaid calls home. This background world-building is one of the things that CGI can be really good for, and in this case, it means that the settings often display more inventiveness and personality than any of the characters running through them.

Recall's real, physical locations are noteworthy as well – not just because they add to the overall look, but because several of them happen to be in Toronto. The terminals on that globe-bisecting subway I mentioned earlier were filmed at the University of Toronto's Scarborough campus, and at Roy Thompson Hall, while some of the outdoor scenes were shot on Melinda street near Yonge. Lower Bay Station also got a bit of screen time (Quaid rode the rocket!), but the indisputable star of the Toronto Recall scenery must surely be Knox College, located in U of T's St. George campus. 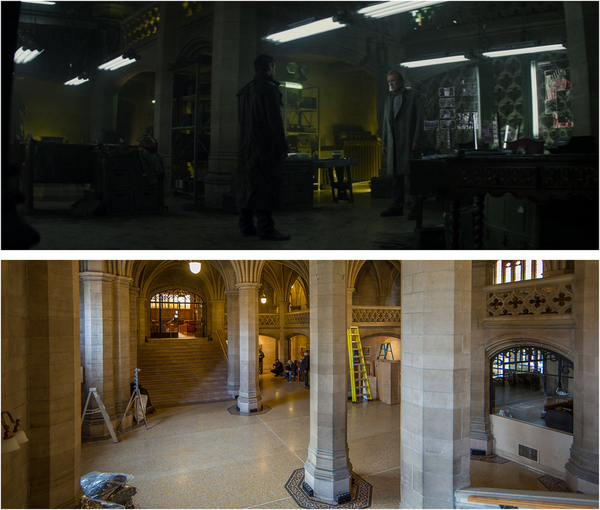 Farrell approached Nighy in this scene and you can see the contrast with how the place actually looks. Notice that when we took pictures for this article, there was another film crew! Is Knox College the new Pinewood Studios?

Built in 1915, the stern and Gothic Knox sits near the southern end of King's College Circle, with its back to St. George Street and its front door opening near Convocation Hall. Movies have used the building to stand in for all sorts of places, but its real-world function is as a theological school – one of several (of different denominations) within U of T.

While not as fancy and castle-like as University College, nor as cozy as Hart House, Knox does have a quite wonderful interior with large pillars, a vaulted ceiling, a courtyard and covered walkway, and its own built-in library and chapel. Everything is either wood or stone, with an eye to grandeur and a sense of peace. So of course, the Total Recall gang stuck it full of soldiers and equipment and proceeded to have a shoot-out in the front hall. I'm not going to give away the role played by Knox in the movie, but it's an important one, and my guess is that The Powers In Charge were specifically looking for an impressive 'old' looking building to contrast with the very utilitarian, futuristic aesthetic of the rest of the movie's architecture. 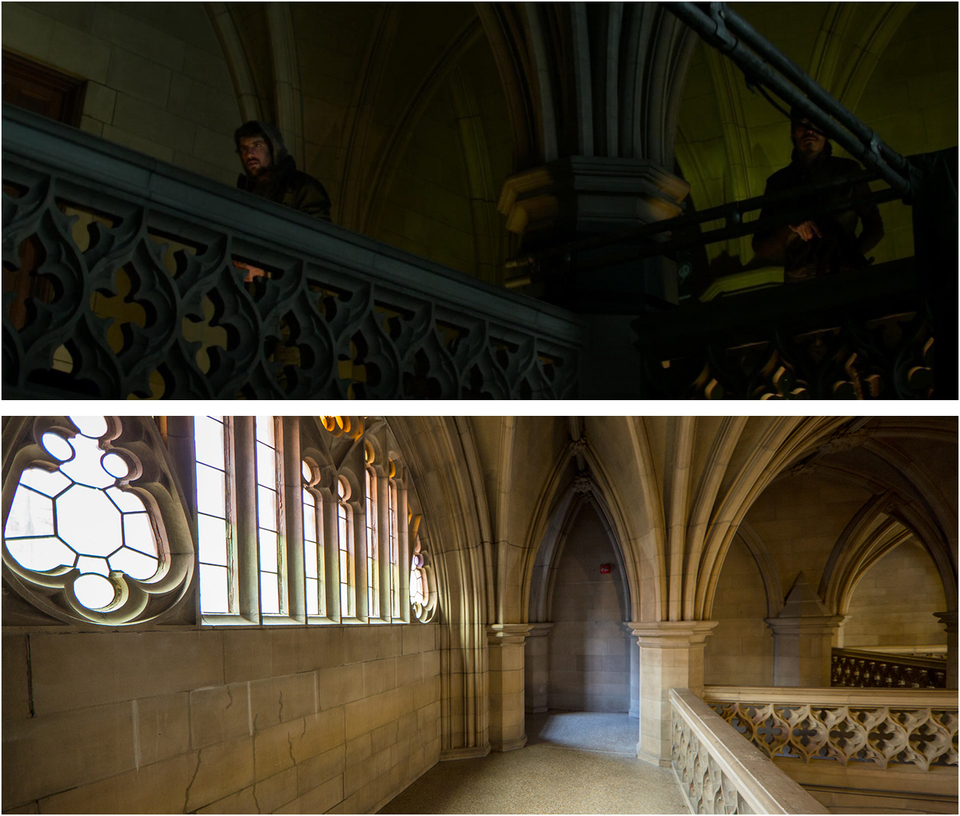 Dark corners of the upper floor of the hall vs. the not-so-dark reality.

If you're in the area and keen for a peek, Knox isn't really closed to the public. Stand in the front hall for a minute, or wander along the covered courtyard walk. If you've a fondness for the Gothic style, or for old buildings in general, it's worth a visit. It's probably going to be more fun than watching Total Recall.