Buying a house in a galaxy far, far away...

I am about to dish out what is for me pretty high praise; there is nothing much really wrong with this movie. In fact, there is an awful lot right. The characters are all pleasant and at least mildly fun to watch, the visuals blend different types of effects perfectly to make everything look detailed, real, and interesting, while the old themes and characters are respected without overshadowing any of the new ones.

But as usual, there are a few sore spots that I just can't ignore.

The Force Awakens takes place about 30 years after the events in the original Star Wars trilogy, and deals with the exploits of Rey (Daisy Ridley – yes, someone actually named their child Daisy), who salvages parts from downed spacecraft on the desert-planet of Jakku. Luck lands Rey with a classic Star Wars VID (Very Important Droid), along with defecting Storm Trooper Finn (John Boyega). Finn is trying to escape his former co-workers in the First Order – the youth branch of the old, evil Galactic Empire, led by a Hitler-channeling general (Domhnall Gleeson), a Gollum-like alien creature, and the callow but snappily dressed Darth Vader fanboy Kylo Ren (Adam Driver).

As I've already said, director J.J. Abrams and his team have done a lot right, and they've done it in the face of incredible pressure and almost impossible, conflicting demands. I was one of those dreadful, optimistic fans who went in with sky-high expectations, so it's taken me a while to untangle my reasonable complains from the ridiculous ones.

In all of the other movies – especially the original trilogy to which this film is clearly paying not just homage, but regular taxes – the villains were utterly two-dimensional, evil, cardboard cutouts. (Yes, ok, Darth Vader did have a spark of good in him, but that was it). Now though, we've seen under that clunky white Storm Trooper armour, and there's no going back. I want to know more about the rest of them. Abrams has established that every trooper is a real, thinking, feeling individual – someone who was stolen from their families in childhood – which makes their use as guilt-free hero-fodder a bit harsh. Was Finn the only decent one in the whole lot? Why?

This leads to my biggest, most un-Star Warsy problem with this film. Why is Finn such a decent, civilized, normal guy? By his own accounts, he was raised by a ruthless militant group to be a mindless soldier, then, for reasons not really made clear, he decided that he couldn't kill people, and went AWOL. This background could make for a very interesting character, but not the everyday hero, audience viewpoint character that Boyega plays. I don't have it in me to dislike him, but left as he is, he just doesn't make sense (and dealing with a more detailed reason for his desertion and morals could have been quite interesting).

Now, to achieve balance, I'd like to point out two very important areas in which The Force Awakens not only lives up to the past movies, but greatly surpasses them. The first one is dialogue. Gloriously absent are the horrible, hokey, stiff lines like "As you can see, my Jedi powers are far beyond yours" that so crippled the prequels (the originals had a bit of this going on as well, but they also had James Earl Jones, who could make practically anything sound good). In general, the Abrams characters talk – and sometimes even behave – much more like real people. In a couple of instances, they even go a little too far in this direction, sounding too much like modern Westerners, as opposed to denizens of a galaxy far far away.

There's another, very welcome absence that deserves mention here; there are no comic relief characters in this film. Even the new droid, BB8 – while clearly kid-aimed and pet-like – is only incidentally amusing, and never feels like he's stealing time from the main story or characters. There are no glued-in, wearying moments of robots doing cute things in the middle of tense situations. All of the humour flows very naturally from the characters – as good movie humour usually does.

Surprisingly, quite a few useful real-estate tips also flow fairly naturally from The Force Awakens. Yes, you read that correctly. What is galactic conquest if not a large-scale land ownership dispute?

1. Don't buy a house close to a Starkiller Base
(or an important government building)

When considering a new home, take into account the the proximity to military installations, secret bases, super-weapons, or other likely targets of violence. Also, once you've committed yourself and bought the place, keep an eye out for new projects moving in – especially if they radically alter the landscape, damage the environment, move in ground troops, or hollow out the planet. 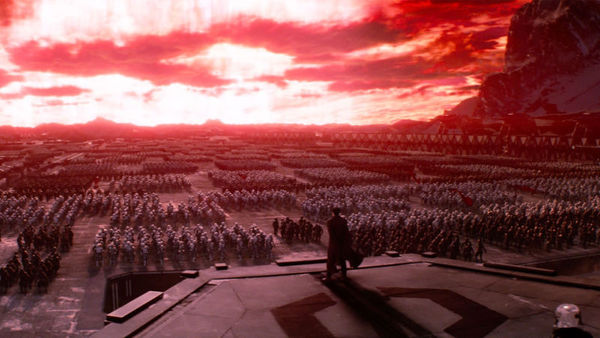 Not the best neighbourhood to buy in, might explode.

2. Keep your Rathar in mind when moving,
they need a lot of space.

Keep pets in mind when moving! Will the new space be big enough for them? Large or potentially dangerous animals will need to be kept in secure locations, behind doors that don't immediately pop open when someone messes with the fuse box. An emergency escape route for the humans in the house might not be a bad idea, either. Or a safe room.

3. Give a chance to that "piece of junk".
You might be surprised!

Don't judge by appearance alone; being used and dented doesn't necessarily mean something is broken. Don't automatically assume that the old appliances, machines, vehicles, or droids left by the previous owners are junk. They might look like junk, but you should probably take some time to test them anyway. There might be valuable information locked in there somewhere – or there might be a really good engine buried underneath the battered exterior. Older, rough looking houses can also contain loads of potential.

What a piece of junk

4. Be prepared to do necessary repairs in dangerous environments.
Or get a Wookie to do it for you.

In the spirit of passing the torch from the old movies to the new, here's an important lesson from the original Star Wars trilogy: If you do decide to take a closer look at that charming fixer-up, consider the ease of fixing. How accessible is the wiring, plumbing, fuse-box, furnace, hyperdrive, etc? The last thing you want is to be stuck contorted in a tiny crawl space attempting an emergency DIY repair job while tools rain down on your head and a wookie howls in the background.

5. Don't go all Kylo Ren on your potential buyers.
So what if they're not worthy of Darth Vader?

No matter how badly a viewing, meeting, or open-house is going, NEVER, EVER vent your frustration on the fixtures or furniture. It's immature, unprofessional, expensive, and is liable to make everyone else present think you've gone to the Dark Side. Using telekinesis on your assistants is also best avoided.

6. Beware of the dangers of the house. Whether it's an old creaky stairway or bridge over an oscillator core.

Last, but definitely not least, be on the lookout for hazardous areas in your new home. Balconies, winding stairways, catwalks over bottomless chasms – all can seem fun and dramatic now, but what if you have guests? Children? There's always the chance that some estranged old relative will show up for an impromptu reunion, and while seniors aren't stupid, they may be more focused on the emotions of the moment than on safety. This is how accidents happen people!