Watching this film for the second time, 25 years later, I am more convinced than before that labelling it a comedy was a colossal mistake; I laughed once. It is not funny. It is dark and sinister, especially when both main characters decide they could/would each kill the other to achieve their identical individual objectives: possession of the House; the Property.

The movie War of the Roses was completed during 1989, and despite the impressive cast (Michael Douglas and Kathleen Turner), the House takes centre stage, and everything that happens during this film is in relation to that House, that piece of Real Estate. The house remains the crux of the movie, and it is an actual property situated at 119 Fremont Place, the private gated community in LA’s posh Hancock Park district. More than 90% of the whole movie was filmed in it. 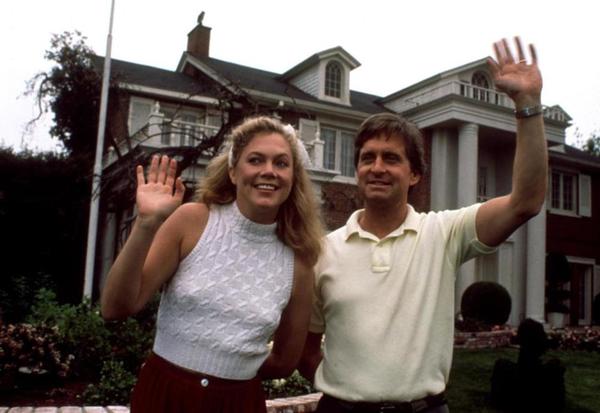 All exterior scenes were shot using the 119 Fremont property, though in real life it looks slightly different. It has either been remodeled and toned down since, or the movie producers added a more elaborate portico to further impress the viewers.

That is very possible when you consider that all those destructive deeds acted out inside the house would never have been allowed by the owner. Because of that gradual demolition, elaborate sets were constructed for filming on site at Twentieth Century-Fox in LA. An enormous three-storey interior set with infinite detail, depicting the complete inside of the house, was built to allow the mayhem and destruction the two Roses would inflict during the last part of the movie.

Often during the story, the camera lingers on a magnificent, huge crystal chandelier, hanging from the lofty ceiling three floors up over the entrance hall of the house. As the story progresses and things get more vicious between the Roses, the chandelier begins to take on an ominous presence of its own.

One of the reasons for this movie’s fame may be the fact that Kathleen and Michael are old buddies, having done two box office successes together before the 'War’: Romancing the Stone and its sequel, The Jewel of the Nile. This one is definitely the best of the three.

The third big name in the movie is Danny DeVito, who performs two directorial roles. He is the actual director of the movie, and he also directs the story of the movie, from inside the movie, as a pivotal character and narrator—the lawyer involved with the Roses’ war.

The opening, closing and numerous in-between scenes of the movie show the audience Danny DeVito as the divorce attorney, who has a tragic tale to tell a client in front of him. He informs the client that there will be no charge for the information and adds "I get paid $450 an hour to talk to people so, when I offer to tell you something for free, I advise you to listen carefully." He proceeds to tell the story about a client of his, and the client’s wife, Oliver and Barbara Rose. He details how the Roses were very happy, till the wheels came off their marriage and divorce proceedings were instituted, bringing that House into dispute. After that they were no longer, and never again, happy. 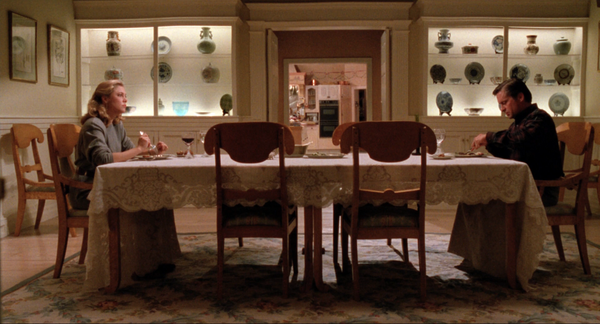 His narration paves the way for the story, in which he sounds surprised that the Roses could ever believe they were going to get away with their happiness. The lawyer's lesson clearly states that happiness has nothing to do with it, anyway. He believes no marriage is destined to be happy (as a divorce lawyer he is obviously biased). The good news is, divorce is actually survivable. Had the Roses only listened.

The first encounter between Oliver and Barbara was filmed in a waterfront village where the estate auction which brought them together took place. These scenes were shot in the small historic town of Coupeville on Whidbey Island. Interesting to note, the ensuing romantic scene of their first lovemaking happens in a guest house room where specific visual attention is given to its beautiful bay windows, which after all these years, are presently very much back in fashion.

At the auction they both bid on a rather nondescript item, a reclining Chinese figurine which both wanted at any cost, with many interesting and disastrous ramifications: their falling in love, the alienation, the hate—right up to the eventual wanton destruction of 'the Property' in question, and their lives. Interestingly, this figurine which led to their union never features during the film, except very close to the end when it becomes integral to the disaster.

Throughout the film they both become more embittered, as love turns to irritation, irritation to dislike and the latter to loathing. Barbara’s growing disgust for Oliver is extremely vile, and she not only thrust the proverbial serrated knife in his gut, but continuously twisted it inside him. Her eventual repugnance becomes palpable. Meanwhile, on a number of occasions, Oliver declares his undying love for her, specifically when a hiatus hernia scares the bejeebers out of Oliver, as he (and everybody around) thought it was a heart attack. 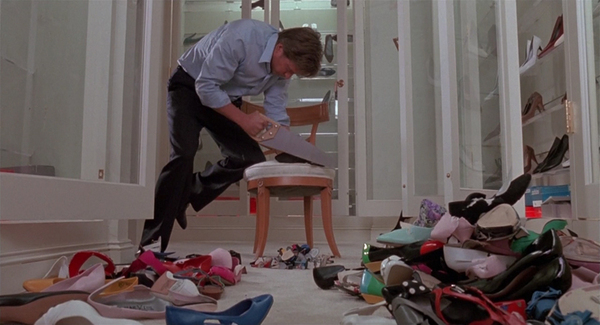 Ever been so angry with someone that you've sawed the heels off their shoes?

Preceding the finale, Oliver is seen sitting in the foyer with a number of bottles of wine, six glasses filled, getting totally drunk, while Barbara is ensconced upstairs somewhere. Then she cautiously comes down and appears on the middle landing of the staircase. Already intoxicated, Oliver sees her and again holds out an olive branch, willing to make amends, but she is not. He had displayed the original figurine on the banister where she could not miss it, and she moves to take it, when through a trick he pulls it down, catches and holds it in his hand, smirking up at her. Although Oliver made repeated attempts at reconciliation, it was always with his own gain in mind, and he is equally as guilty of hate and duplicity as Barbara.

Oliver stands there, under the chandelier, and holds the reclining figurine upwards to her and says, quite magnanimously, "say this is mine, and you can have the house." It was an offer she should not have refused, however, her wit and spite ruled supreme, and from her deep-seated loathing she hisses at him it is MINE!" Her final goading was also for him the final straw, and with a fire iron he smashes the figurine to smithereens in front of her, with a particle actually hitting her in the face, and that resulted in the final battle in the War of the Roses.

With revenge as his only intent, he charges up the stairs and physically attacks her. During this final encounter Oliver pushes Barbara through the banister when, with her inbred agility as a noted gymnast, she dives and grabs onto the magnificent crystal chandelier and hoists herself gracefully onto it. Oliver repents, leans forward, and hooks the swinging chandelier with the iron he used to destroy the figurine, with the intent of pulling her back to safety. 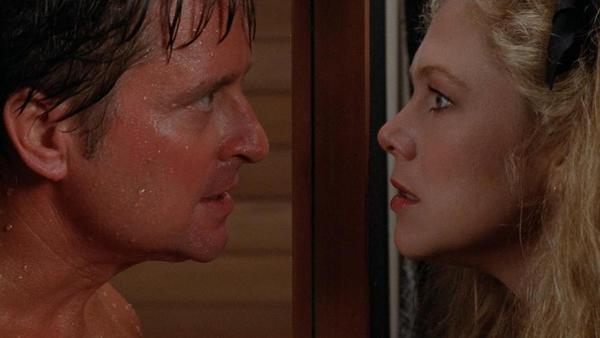 If looks could kill.. they'd both be dead.

Being drunk and with no banister to hold onto, the weight of it pulls him off the landing too. As he topples he grabs the only source of salvation available—the same chandelier. Then, quite contrary to his inebriated condition, Oliver manages to hang on to the lights, and with unexpected agility also hoists himself into the bowl-shaped chandelier. The result is one of the very few mirthful moments in the movie; it looks like they're lying together in some unlikely hammock made for two.

Help arrives too late; the wiring of the lights disengage from their fittings high in the loft, and our two reprobates unceremoniously plunge to the floor, way, way down. That is the beginning of the end to the riveting finale of this engrossing love-hate film, which you just have to see to even begin to comprehend the inhuman depth to which Barbara's loathing for Oliver had sunk.

And now for the real estate lessons...

In real life, buying a property is a paramount resolution, to be carefully deliberated and calculated. When buying a new house, especially with the first one, you have to take extra care.

Do not mar the future value and appreciation of a cherished property through unpreparedness. Do it thoroughly. Foresee, plan, be prepared; in that way you will extend the happiness of ownership to multiple individuals and avoid your own personal 'War of the Whoever’.