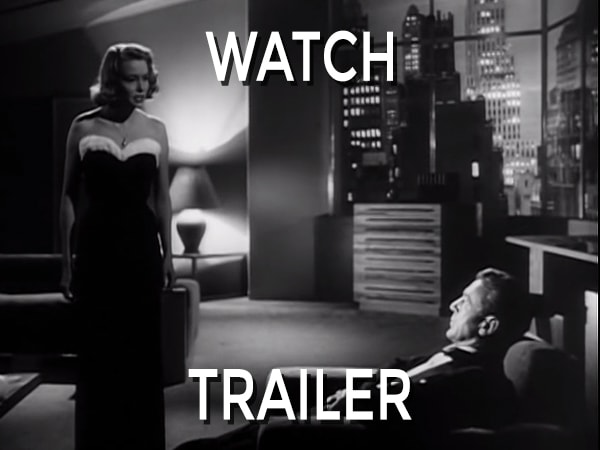 The Fountainhead (1949) was released by Warner Bros. and is based on author Ayn Rand's literary masterpiece of the same name. The film stars film legend Gary Cooper as headstrong architect Howard Roark, Patricia Neal as idealist Dominique Francon, and Raymond Massey as newspaper magnate Gail Wynand. Directed by King Vidor and scored by Max Steiner, The Fountainhead is a beautiful example of Hollywood at its finest. It illustrates the cut-throat reality of real estate, architecture, and the public's insatiable appetite for tradition and otherwise mundane structures that populate their city and suburban spaces.

A building has integrity, just as a man and just as seldom! It must be true to its own idea, have its own form, and serve its own purpose!

declares struggling architect Howard Roark. The film begins by depicting Roark's undeserved expulsion from university. His dean proclaims him too unique and forward-thinking for the average man's traditional sensibilities and declares that Roark won't amount to much if he sticks to architecture as a profession. Roark's designs are ahead of their time: presenting sleek, unblemished lines and curves on both residential and commercial buildings that any other architect would stick Grecian accents on before calling it a day. The public and the community's builders cannot see past Roark's visionary designs to recognize the greatness and genius that undulates within each one. 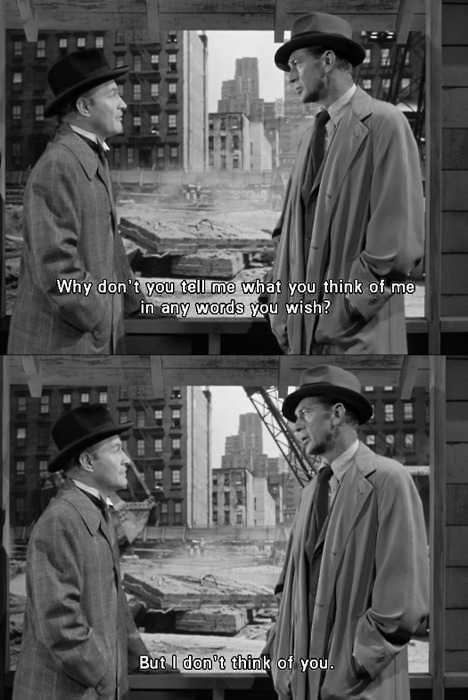 Howard Roark quickly becomes a starving artist because he refuses to adapt his designs to fit the mob's consensus. No one will hire him and anyone who does consider commissioning him for a job attempts to re-work his plans and incorporate more traditional accents and flourishes onto his buildings. Roark stands firm and refuses to alter his designs despite the fact this means that he is kissing his career as a successful architect goodbye. After having gone nearly two years without a single job, Roark is forced to accept a position working in a granite quarry, drilling into vast white sheets of marble to make a living. The work is laborious, tedious, and overwhelmingly exhausting, yet Roark remains stalwart and committed to performing his task to the best of his abilities. Gary Cooper excelled at playing righteous characters with strong, determined backbones and he is completely mesmerizing in the role of Howard Roark in The Fountainhead.

Dominique Francon (Neal) is a woman determined not to become a slave to any man or object. She is flawed, certainly, but her hesitancy to belong to any one person rings true to today's feminists and gender equality seekers. She is just as headstrong and stubborn as Howard Roark is and it's only natural that the two characters are immediately drawn to each other after spotting one another at the granite quarry. The relationship between Howard and Dominique is sultry yet damaged, tender yet violent. Dominique is a spoiled socialite but her one redeeming quality is that she recognizes talent and stays true and loyal to it as she does when she is introduced to Roark's designs and work ethic. Once Roark gets back on his feet again and is commissioned to design a luxury high-rise apartment tower in the city, his modern designs are ridiculed not by the builder who sought Roark out specifically for his architectural prowess, but by the public and their destructive criticism is egged on by one of the city's most prominent newspapers, The Banner, which is owned by Gail Wynand (Massey).

Lambasted by the public, the press, and his fellow architects, Roark perseveres with his modern designs and, once completed, the apartment tower is hailed as being a truly magnificent and original piece of architecture. His critics are silenced â temporarily â and his work quickly gains popularity. 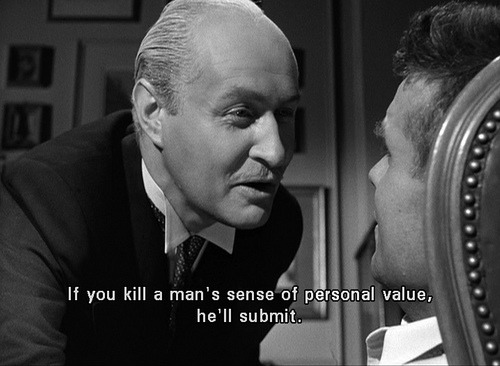 Unfortunately, any man's (or woman's) climb to the top of his or her profession is rarely an easy one. The way up is paved with rejection, ridicule, dangerous temptations, and ill will â all of this causes Howard Roark, no matter how strong of a constitution he has, to stumble. His pride and his unwillingness to change result in a total professional upheaval and Roark is forced to defend himself in court, risking not only his livelihood but his professional reputation as well. Still, through thick and thin, Dominique Francon remains a constant fixture in Roark's life, defending him to the last and sticking by him in his darkest hour. She has unwittingly become a slave â the very thing she was determined to avoid â and she discovers that there is nowhere she'd rather be than in the arms of Howard Roark.

The Fountainhead is a film full of elitism, pride, vanity, and defeatist attitudes. It is also one of the most beautifully shot classic black and white films I've ever seen! Its cinematography and set design harkens back to the German expressionist masterpiece Metropolis (1927) in which the world is broken into two social classes: the workers and the elite. The Fountainhead's cinematography has an almost film noir quality about it; plenty of smoke, hard edges and clean angles, shadowy spaces, and awesomely cropped longshots. Lightness and darkness fight for screen time here and the victor is a marvellous visual blend of hard and soft modern film celluloid. 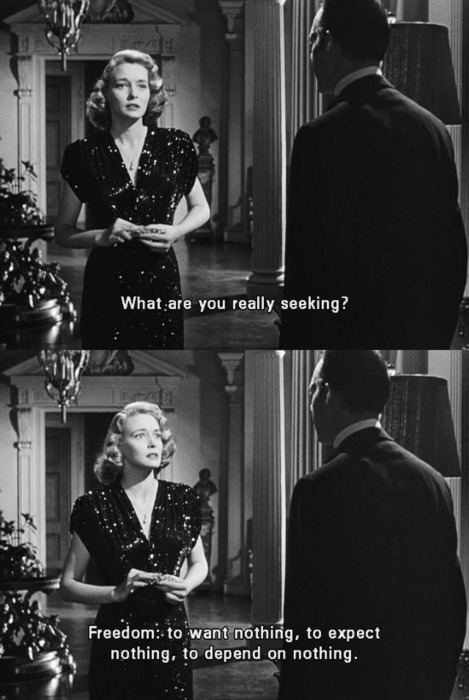 The only aspect of the film that I had a slight problem with was the evident lack of chemistry between the two romantic leads (Cooper and Neal). They each portrayed their characters well, but that special, essential spark and fire was missing from the finished version of the film. Perhaps the studio, producers, and director (King Vidor) were well aware of this issue because, though Cooper and Neal were two of the story's major characters, they didn't share a large amount of screen time. Rather, the majority of their scenes were filmed separately.

Was architect Howard Roark wrong in thinking that he could establish a successful business for himself without having to bend to the public's traditional and boxed-in ideals? This film beautifully illustrates the struggle between originality and conventional wisdom not only in the world of real estate and architectural design, but in society as a whole as well. We, as a society, are merely comfortable with the things that are familiar to us and are often unwilling to accept change. The Fountainhead does an incredible job of forcing us to re-evaluate our thought processes and open ourselves up to change and modernity in the form of ingenious design.