DAYS ON THE MARKET: Nine

Just a few houses west of hot restaurants on Roncesvalles Avenue and a couple of blocks away from Howard Jr. Public School, High Park and the subway, this century-old Edwardian racked up 32 showings and a solid offer after one week. 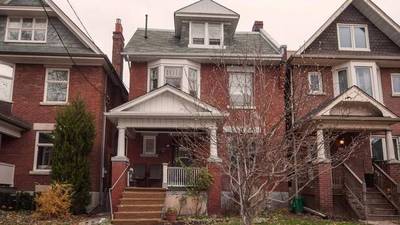 This detached, 2,230-square-foot residence could be divided into three apartments with kitchens and four-piece bathrooms on the main, second and third floors, as well as a second entry point off a rear stairwell connected to the 860-square-foot basement.

As a single-family dwelling, there are five bedrooms on the upper levels, a main floor living room and a formal dining area, plus two decks, a fenced yard and two-car laneway parking on the 26-by-114-foot lot.

The decor is historical with original wood trims, stained glass windows and two fireplaces with cast iron inserts scattered throughout.

"It's a primo location and the Howard school district is a big deal, so you're one block south of that … and you don't have to cross any streets to reach it,"

"They have really great neighbours."

The home's configuration also spoke to a wide segment of buyers. "[The seller] rented the second and third floor, but hadn't changed the layout of a single-family home, so it's really easy to convert back, which most buyers were looking for," Ms. Kinnear said.

"It could turn into quite a grand home with an especially large third floor, which makes it unique."