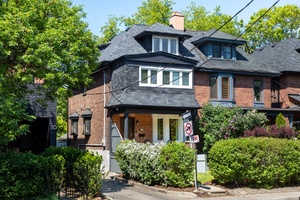 ** Gorgeous Oversized 3 storey semi! Renovated Family Home in Prime Parkdale!** Sprawling 5 Bedroom + Office (all above grade!) super spacious home. Many recent renovations plus well upgraded $$ mechanics. Easy to convert to 2 x 2 storey suites if you are looking to live in with income, and "grow" into it. All the natural elegance & grandeur of yesteryear with modern updates & natural light galore! Incredible Outdoor Living-Very Private Yard For Kids/Dogs/Gardening Plus Walk Out To Tranquil Main Floor Party Deck (Extend back yard if remove one parking space) & Upper Sun Deck. Hello Sunsets! 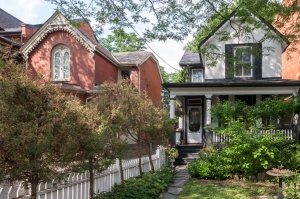 Story Book Victorian Gem With Basement Suite & Garage/Studio.
This is by far one of the coolest homes you will find on the market today! Escape to a different sense of time and place in this beautifully refurbished 1880’s 2 storey detached Victorian with modern day bells and whistles yet oozing original period charm, craftsmanship and character throughout. 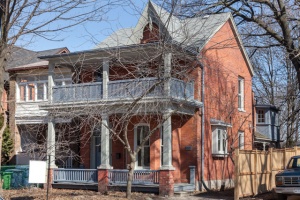 Hello Gorgeous! Looking for a home in a dynamic central location with tenants to help pay the mortgage? Enjoy living in one large space while renting out the other. 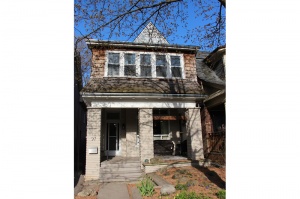 Showstopper! Renovated Yet Retaining Charm & Elegance! This expansive DETACHED has an incredible amount of space and a fabulous floor plan. Set on a quiet dead-end street with a large and sunny 25 x 133.00 foot lot. 2 Blocks north of Queen St. W. 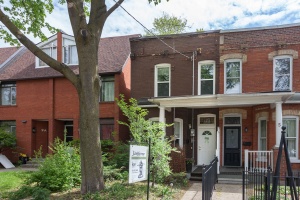 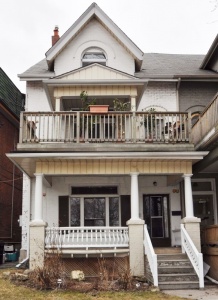 Some of the Parkdale Happy Clients - this could be you! 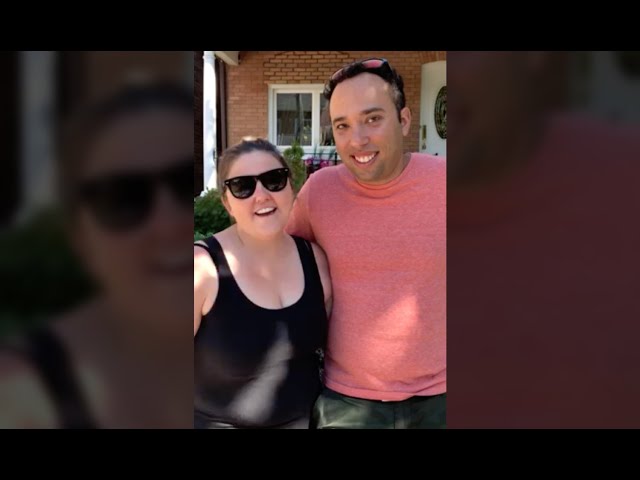 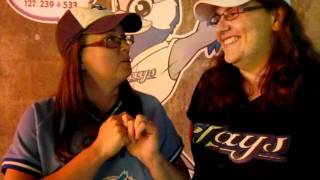 Vogue Magazine calls Queen West the second coolest neighbourhood in the world in their Global Street Style Report! "the magazine notes that Queen West is enjoying newfound popularity among international tastemakers, and dotes on the area’s “indie patisseries, homegrown labels and hidden-from-view galleries,” with special mention given to The Drake Hotel, Bicyclette Boutique and the Museum of Contemporary Canadian Art"

PARKDALE's history began in the late 1800's when it was an elite residential suburb that rivaled Rosedale as Toronto's most desirable address. Parkdale's popularity led to its amalgamation with the City of Toronto in 1889. 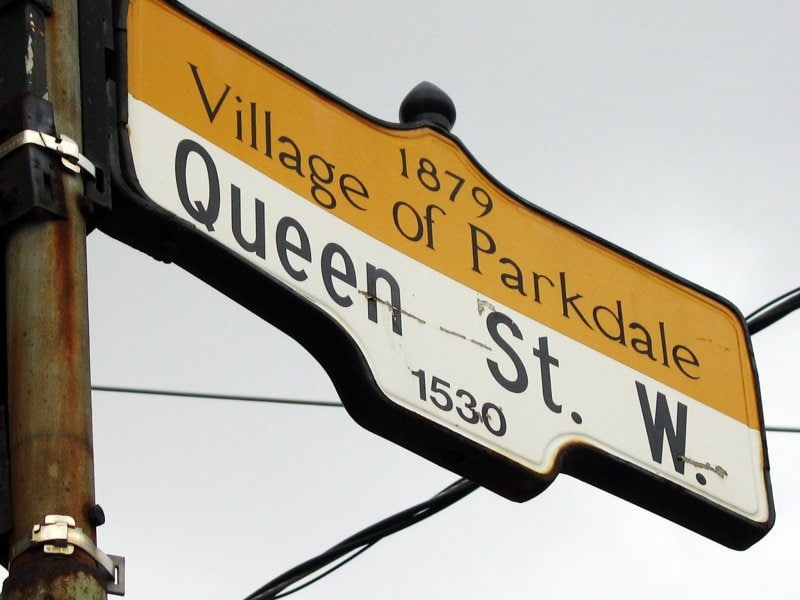 Parkdale became Toronto's 'playground by the lake' in 1922, when the Sunnyside Amusement Park and Bathing Pavilion opened for business on Parkdale's beaches. Sunnyside Beach was the place to be and be seen for a generation of Torontonians.

In 1956, Sunnyside was shut down by the city in order to make room for the Gardiner Expressway and a revamped Lake Shore Boulevard. Unfortunately, these new expressways cut Parkdale off from the lake and its glorious past. Parkdale still has some 'big city' social problems to contend with. However these concerns are being addressed as the neighbourhood revitalization has been well under way for decades, helping the area to recover its poise. A local residents group known as the Parkdale Community Watch, dedicated to the safety and well-being of the neighbourhood, recently received an award as the best neighbourhood watch group from the International Society of Crime Prevention. 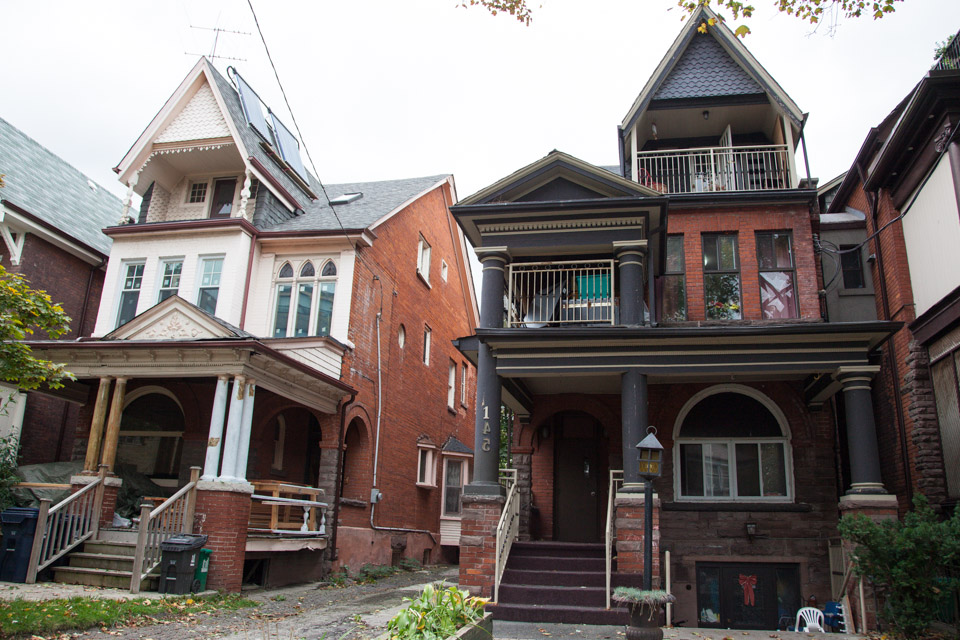 The Parkdale neighbourhood possesses many positive attributes. It has some of Toronto's most vibrant shopping districts, wonderful tree lined streets, affordable Victorian homes, and impressive mansions that remind onlookers that Parkdale was once Toronto's wealthiest district. Parkdale is also within walking distance of Toronto's waterfront parks and other greenspaces, including:

South Parkdale's grandiose mansions were built between 1875 and 1895, and those in the north end above Queen Street were mainly built between 1900 and 1910. Some of the bay-and-gables mansions and homes that had been converted into rooming houses are now being immaculately restored to single family use and mix elements of Queen Anne and Richardson Romanesque styles. 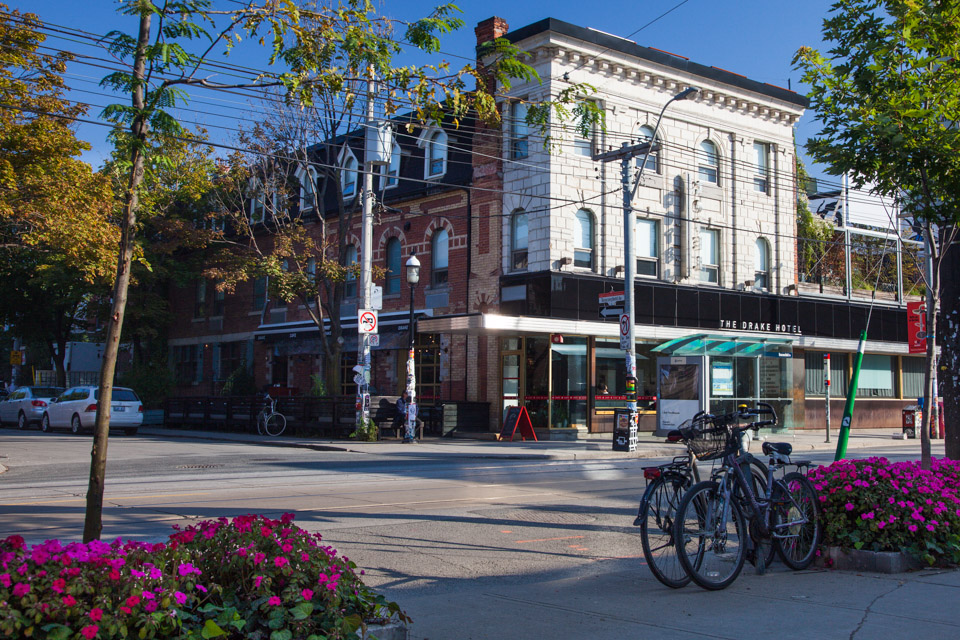 The main commercial shopping area in Parkdale has historically been on Queen Street. This vibrant, creative shopping district seems to be in a state of perpetual activity; it includes an eclectic mix of shops and restaurants, many cafes, chic bars, boutiques and galleries. For those vegan-friendly, Vegandale is a great place offering everything vegan - food, goods, services and clothing!

The liveliest stretch of Queen West, including the Gladstone Hotel, has some of the best architecture west of the Annex. 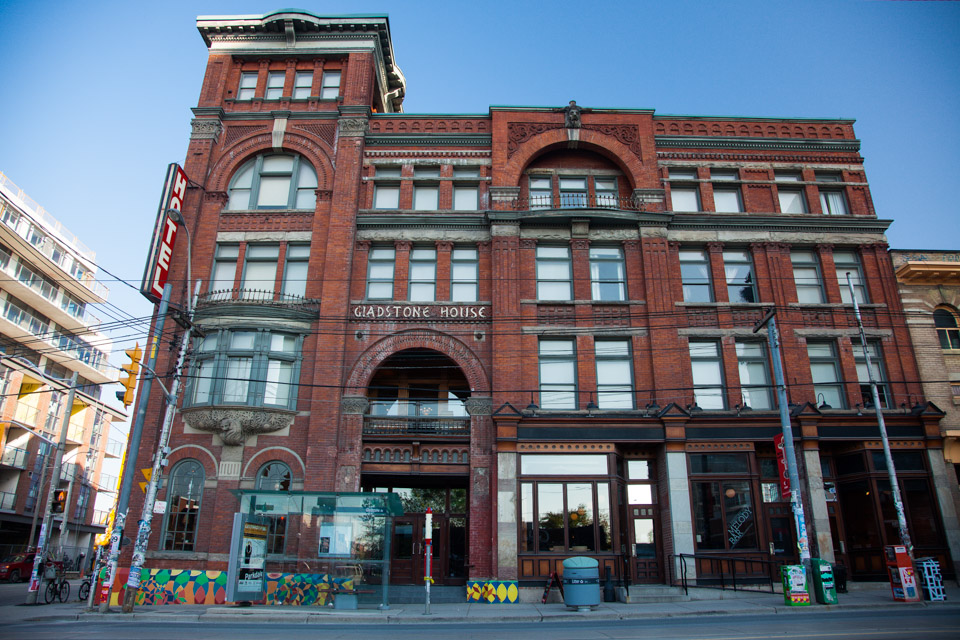 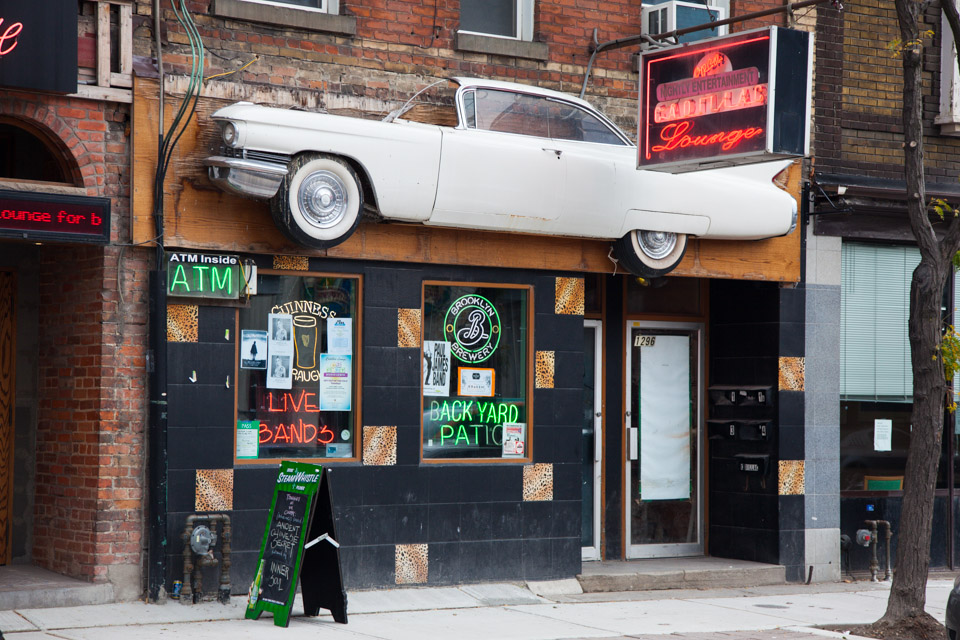 Parkdale has yet to become Condo-central, but other signs of gentrification — be it the indie cafes, trendy restaurants, art galleries (there's even a moratorium on new bars and restaurants!) — continue to pile up. One need only travel by Queen and Dufferin to see that the condo push is moving westward. 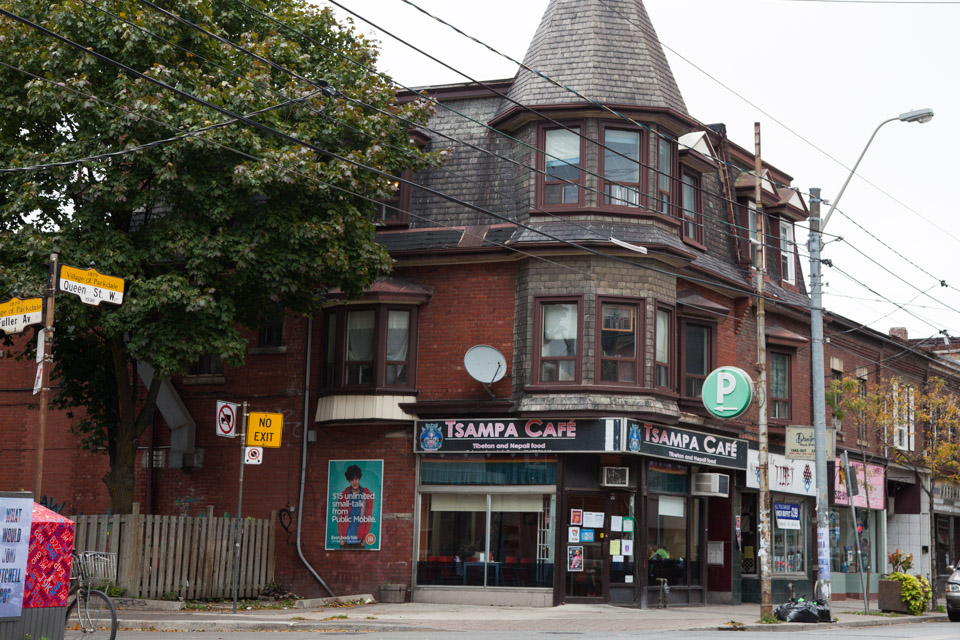 Four community centres serve the residents of this neighbourhood: 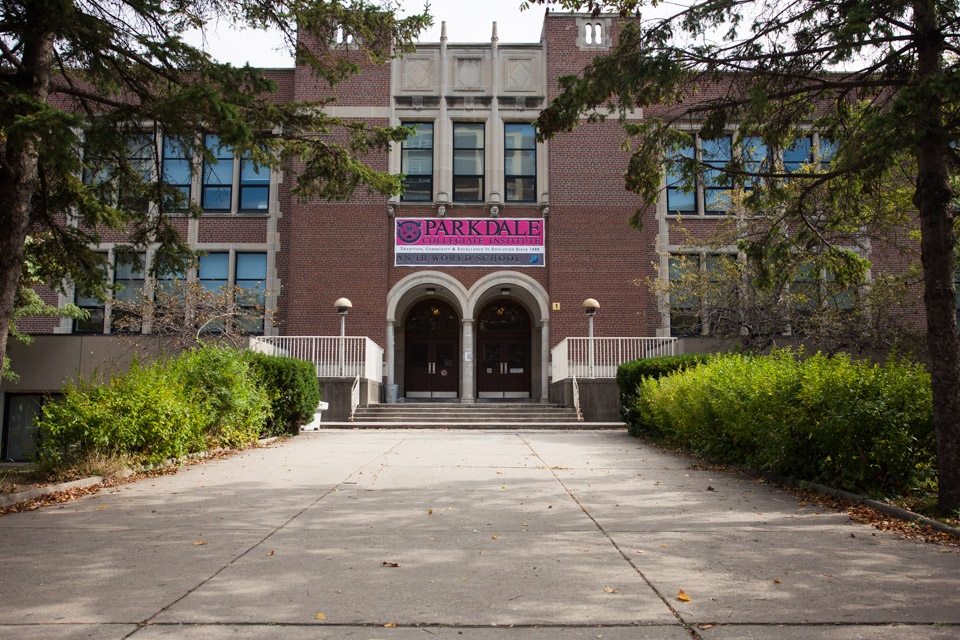 Parkdale is also home to well regarded public schools such as:

Streetcar service on Queen Street, King Street, Dundas Street, Roncesvalles Avenue, and Macdonell Avenue, connect passengers to the downtown core and business district, or to subway stations on the Bloor-Danforth subway line. Motorists are just minutes from downtown. There is direct access to both the Gardiner Expressway and Lake Shore Boulevard, at the south end of Parkdale.