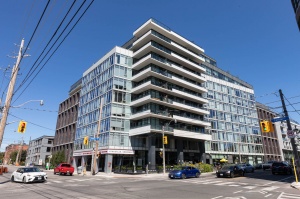 The Best Floorplan in the Building! 685 SqFt Loft with 1 Bedroom + Den in the Heart of Leslieville! 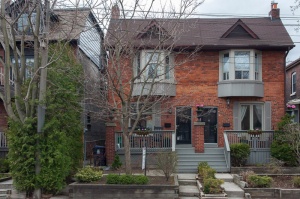 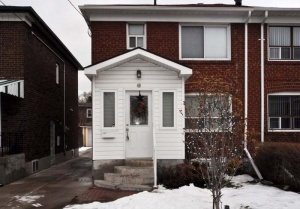 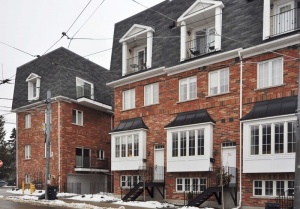 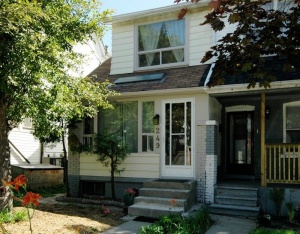 Great opportunity for a growing family!

Ideal for buyers looking for a plethora of space or rental income potential in basement. 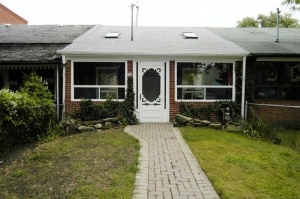 Some of the Leslieville Happy Clients - this could be you! 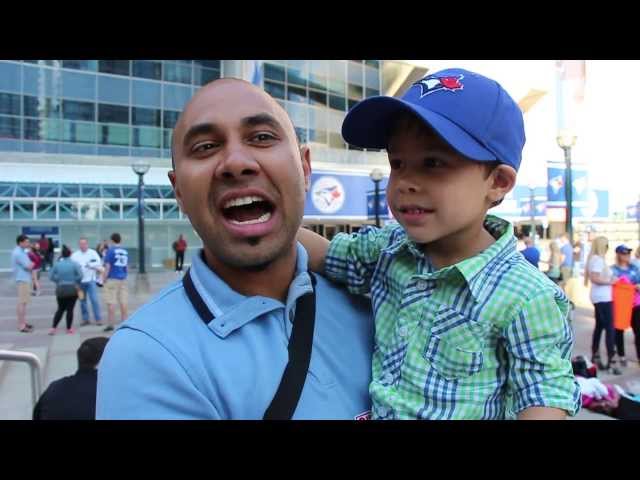 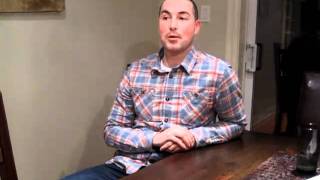 Davin's Story of Selling with the JKT

What could be better than living in an area with a self-proclaimed motto of, "It's better in the 'ville"? Known for an active community, small locally operated businesses, a family-friendly feel, along with a dash of urban hipster, Leslieville is certainly a fun and friendly place to live. With a plethora of coffee shops and cafés, this area was once boasted as "the next Williamsburg" by The New York Times.

Whether you're looking for convenient access to the downtown core or a quick hop, skip, and a jump away from the serene surroundings of Scarborough Bluffs, or a fun sense of east end community, "the 'ville" may be the perfect place to call home. 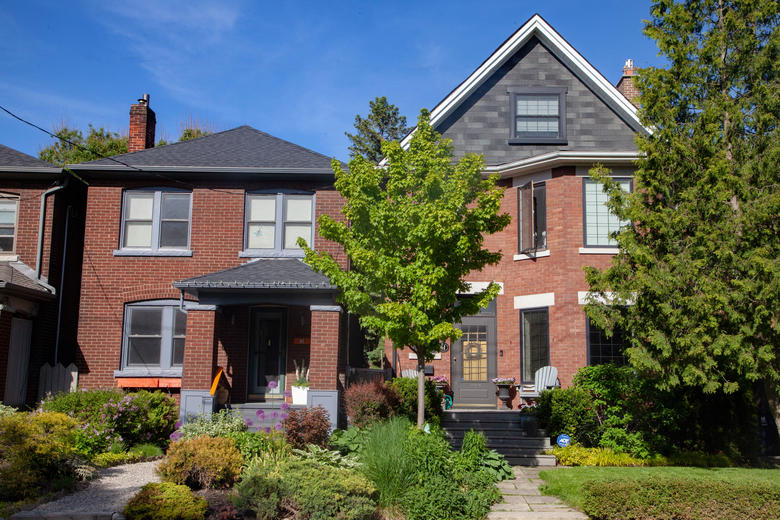 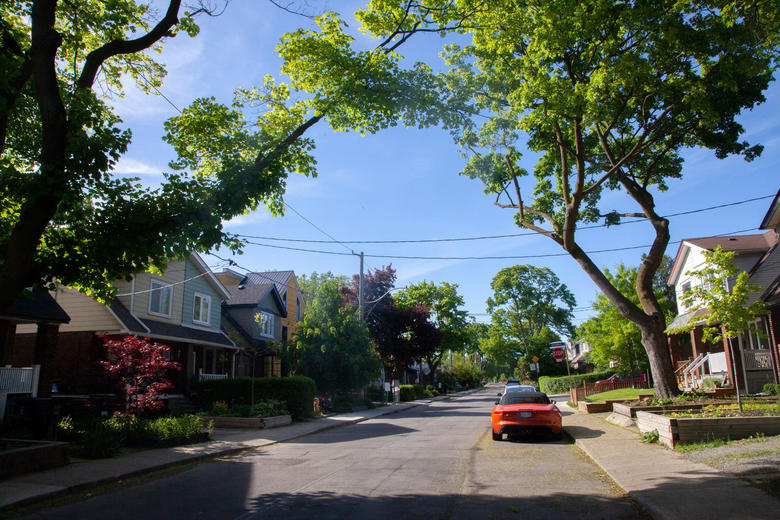 The roots of Leslieville were late in the 1850s as a small village formed near George Leslie's Toronto Nurseries (after whom this neighbourhood is named). Because of the nature of the work in the area, most people who lived here worked in gardening, agriculture, or were a part of the nearby brick-making factories or lighting industry. Today the general store, one of the original buildings in this village, on Queen, just east of Jones Avenue is still standing. Because of the numerous industrial businesses, Leslieville was once known for fumes and air pollution.

In 2000, the A.R. Clarke Tannery caught fire, with residual burning ongoing for days, emitting fumes, and noxious ash throughout the area. In the time since, the area has changed dramatically, with very little industrial activity. Some of the industrial buildings have become the home to film studios such as Cinevillage, Pinewood Toronto Studios, and Showline Studios, and other industrial buildings are being redeveloped. Big changes came in 2000-2010 with the area becoming a hot, "up and coming" place to buy and build with the area becoming the place to live for middle-class Torontonians. This change inspired efforts to minimize smells from Canada's biggest Wastewater Treatment Plant, Ashbridge's Bay, making things smell more pleasant for those who live in Leslieville and the Beach neighbourhood.

Leslieville's older houses along Queen Street, and south to Eastern Avenue were built in the late 1800s. They include architecturally interesting Ontario Cottages, Second Empire row houses and Victorian houses. Its second generation of houses, north of Queen, were built in the early 1900s. This district includes modest detached and semi-detached houses as well as a large number of bungalows. 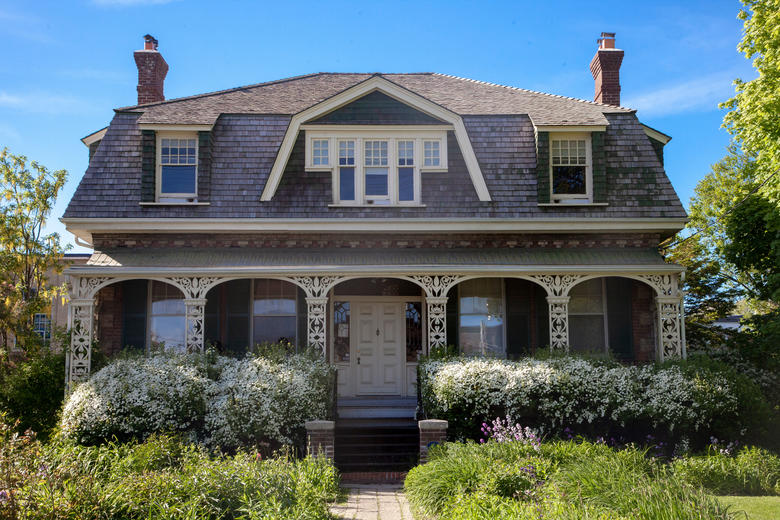 Leslieville's first public school principal was Alexander Muir, who composed "The Maple Leaf Forever". Muir's poetic verse was inspired when a brilliant autumn maple leaf fell from a Leslieville tree onto his jacket. 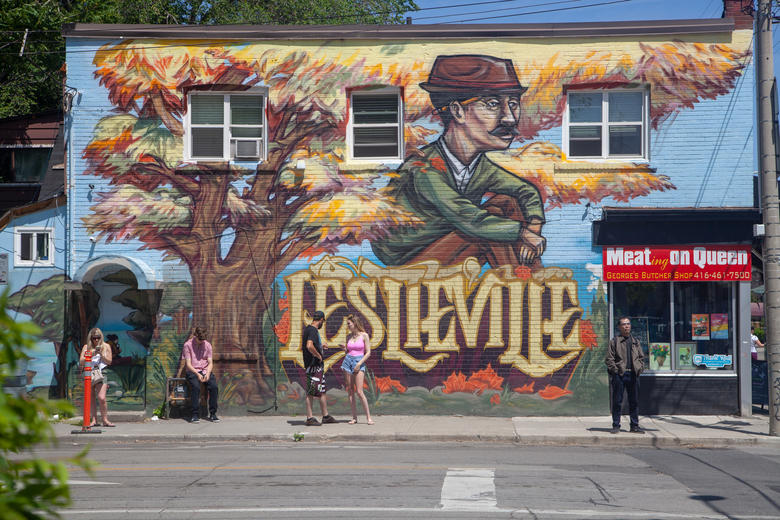 Walkscore.com rates Leslieville as a Walker's Paradise, with a bona fide score of 92 percent. Daily errands will not require a car, transit is convenient and fast (most people can make it downtown in less than half an hour by public transit), and you can even bike downtown in less than 20 minutes. In addition to multiple streetcar and bus routes servicing the area, Zipcar rentals are readily available for those who want a "once in a while" vehicle. 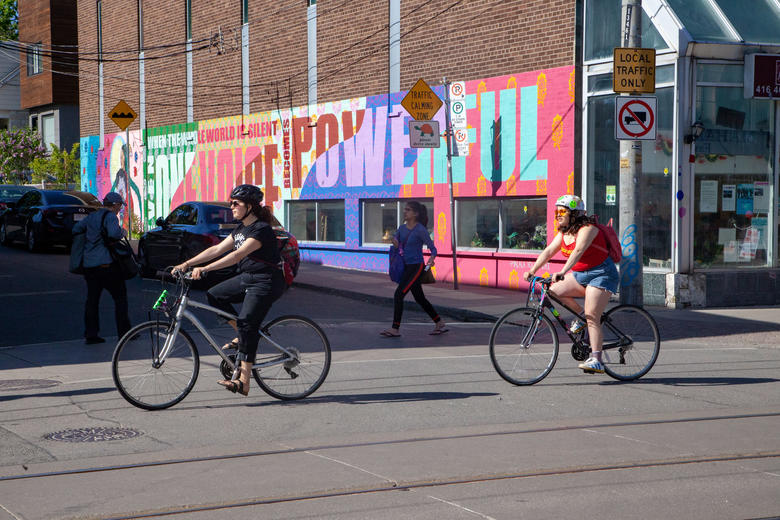 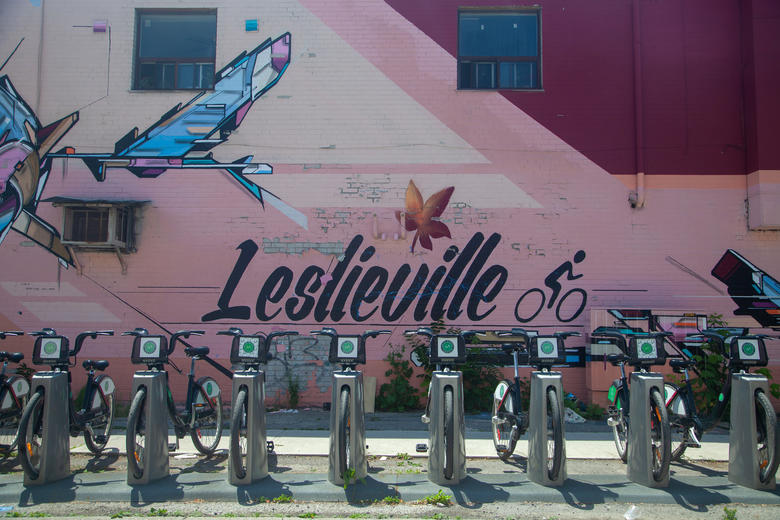 When I moved to Leslieville, I was nine months pregnant. That was nine years ago. Right from day one, I felt a strong community vibe among the original Leslievillers and the growing number of new families laying down roots in this east-end Toronto "hood." With so many parks, playgrounds, cafés, and stores all within walking distance from each other, it makes raising a family (and pushing a stroller) so easy all year round.

Leslieville is packed with plenty of parks for families to play. The most notable parks in the area include Greenwood Park & Dog Park, Morse Street Playground, Lesliegrove Park, Jonathan Ashbridge Park, and KEW Gardens. 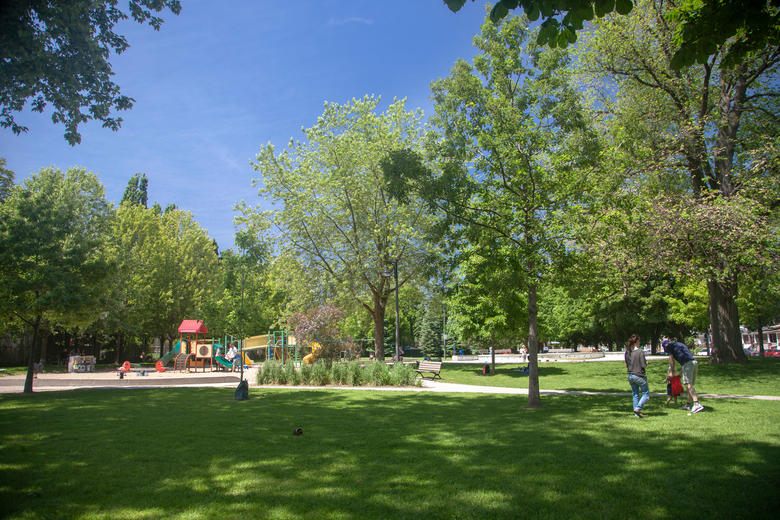 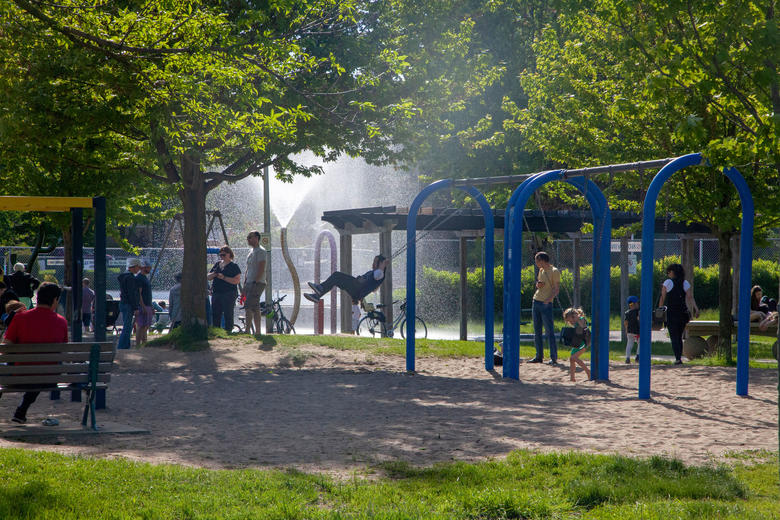 Residents of Leslieville have access to dozens of public, private, and specialty schools, programs and daycares supporting the needs of their families, including:

In addition to access to numerous educational institutions, there are also three public libraries in the immediate area including:

Coffee lovers and brunch aficionados flock to Leslieville for their fine coffee fare. Craving some Java with your Juggernaut? Visit The Sidekick Café and comic shop. Freelancers can host face-to-face coffee meetings with clients or crank through their day's work at Dineen Outpost or Te Aro.

Those who want to fanboy out while noshing on brunch should visit French bakery Bonjour Brioche for their quiche, croissants, and connection to the hit series The Handmaid's Tale, as it was featured in season one. Just get there early on weekends, as lines can be lengthy. Other area favourites include Lady Marmalade for their locally sourced brunch and lunch feasts. 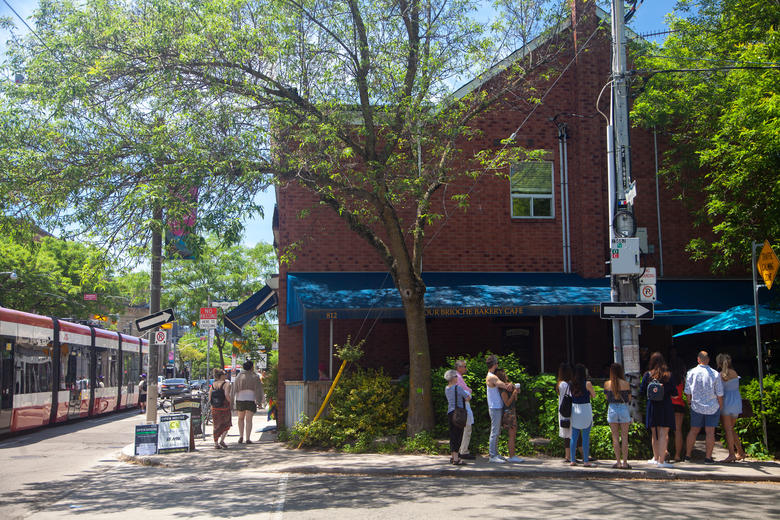 On hot days, after some time at the beach, or hanging out in Leslieville itself there is no shortage of ice cream to try out. Visit Ed's Real Scoop or Brett's Ice Cream for more traditional favourites, Sweet Jesus for Instagram worthy cones, or Wong's Ice Cream (located in East China Town) for rarer flavours like Siracha Buttered Popcorn, or Pineapple Cilantro frozen treats, with scoops served in miniature Chinese takeout containers.

In addition to being known for having the highest concentration of Indian owned and run businesses, with fantastic South Asian cuisine, Leslieville is a foodie's paradise. Highly rated South Asian restaurants and grocers in the area include Lahore Tikka House, Udupi Palace, Gautama, and Kohinoor Foods for supplies to make your own South Asian inspired meal. 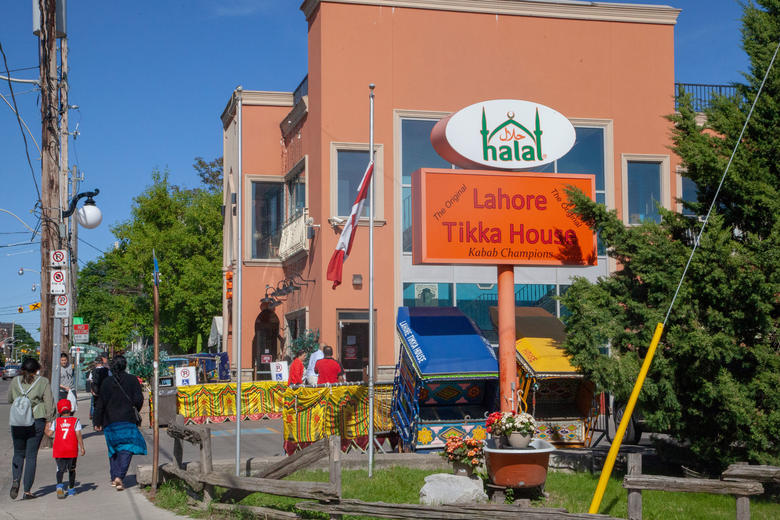 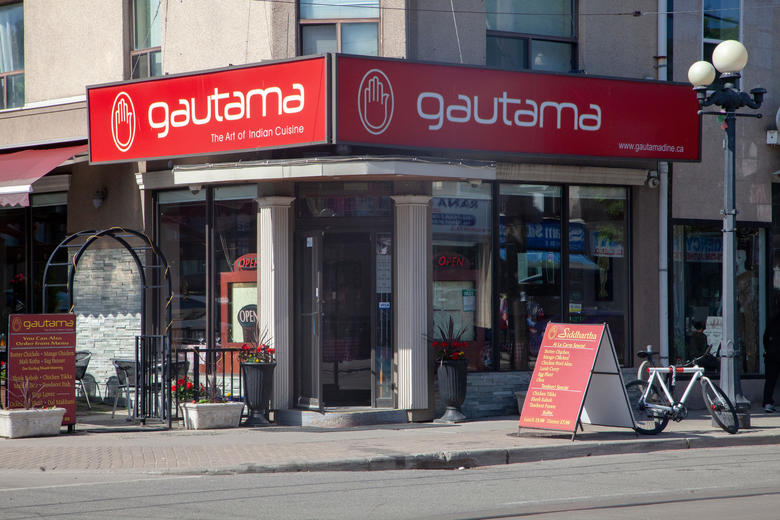 Those who want to pretend to be a tourist for the night can enjoy the picturesque view of the downtown skyline (from a slight distance) atop The Rooftop at The Broadway Hotel. The Rooftop space has outdoor and indoor seating, and you can even order their signature drink: The Riverside for around $16. If the patio is too crowded, there is seating downstairs in their Café & Bar.

There is so much to choose from for a night out in Leslieville! Wayla Bar hosts drinks, private events, art shows, karaoke, comedy, and open mic nights. Meet locals at Wayla for regular events like their Drag Race viewing party, monthly Deep & Disco night, or Back Room Comedy.

Feeling like wine? Head to Chez Nous, a wine bar that exclusively sells Ontario wines and locally brewed beer. The craft beer scene hasn't forgotten this east end area. Local brewers include Rorschach Brewing Co., Radical Road Brewing Co., Left Field Brewery, Brooklyn Tavern, Eastbound Brewing Co., and Godspeed Brewery. Got a dog, enjoy a pint after a walk with your pup at Black Lab Brewing, where you and your best friend are both welcome, as their motto is "Sit. Stay. Drink." 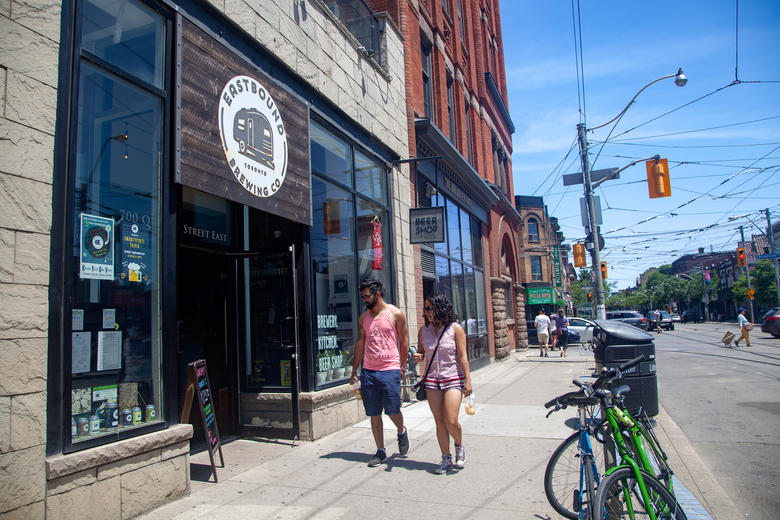 Not sure which brewery to go to first? Head to the annual Leslieville Beer Festival, which is a neighbourhood street party with beer, at the end of the August and figure out which breweries you want to frequent the rest of the year.

Need inspiration for date night? Carrie T. raves that I'll Be Seeing You is a perfect spot, owned by two entrepreneur sisters, to take your Riverdale sweetie. She says:

I love this place! It's the right mix of cozy but buzzing on Friday night. Cocktails are legit here! In addition to their specialities, they do the classics well including a "build your own" Manhattan and an honest-proper Long Island Iced Tea that packs a punch.

You don't need to head downtown to an arena to catch a hot band. The Opera House is a pillar of the Toronto music scene and staple of Riverdale History, first opening its doors in 1909 as a Vaudeville Theatre, later becoming a movie theatre. Today the music venue hosts regular concerts with many world-renowned bands gracing the stage. 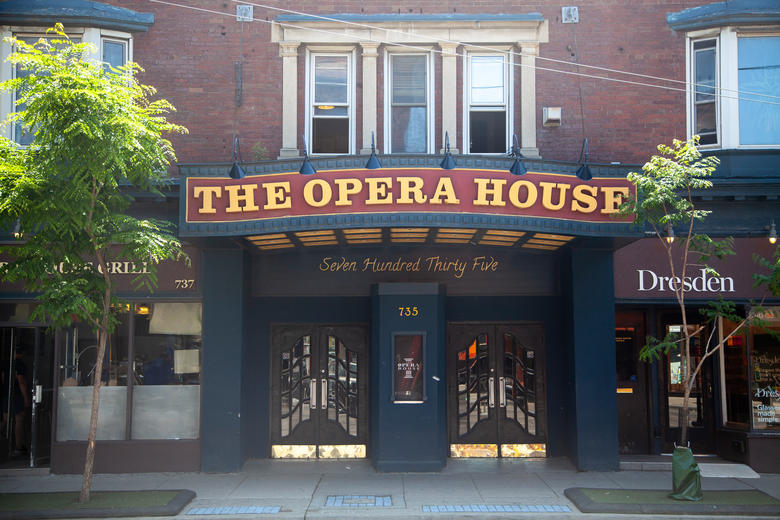 Supporting locals and women in the area Blue Crow Gallery is a female-run Gallery known for showcasing the artwork of Canadians and providing a plethora of adult classes and kid-focused programming including summer camps. Leslieville is also home to Visions Gallery, Gerrard Art Space, and many more. 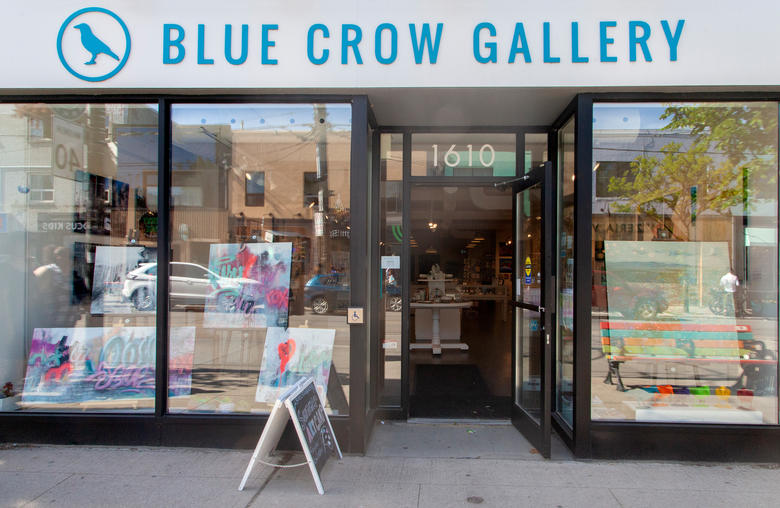 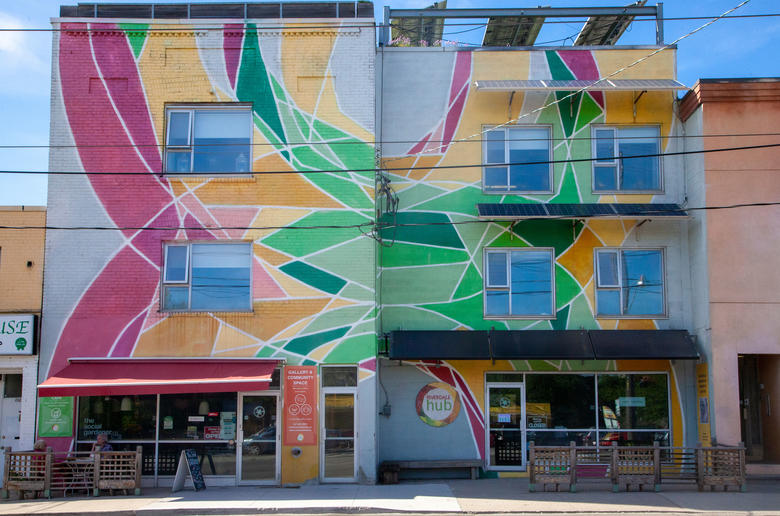 The relatively recent influx of artistic folks moving into the community in Leslieville has influenced local shopping. Leslieville's own indoor Arts Market is located at 1114 Queen St. East and rents spaces to artisans and entrepreneurs. This allows them to sell what they make, and test-drive new products, without lengthy and costly contracts, showcasing items to shoppers who want to support local art, crafts, and creations. Under one roof you can shop for jewelry, furniture, art, and food. The business model has been able to expand to two other locations, one close by in Riverside, and the other in Little Italy. 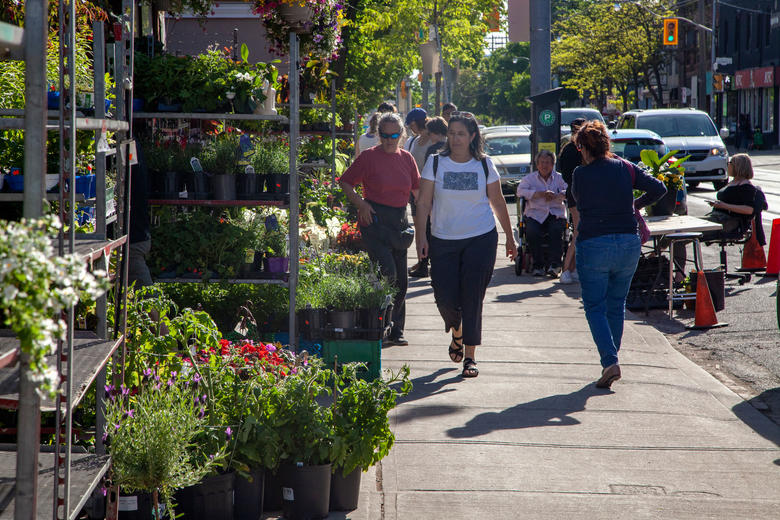 Known for community-run shops, with many locally sourced products, residents of the area and visitors alike enjoy shopping in the smaller shops compared to big box stores in other communities. Enjoy previously loved items at Gadabout Vintage, some funky women's clothing at Doll Factory by Damzels, or the carefully curated General Store/Apothecary, Good Neighbour. 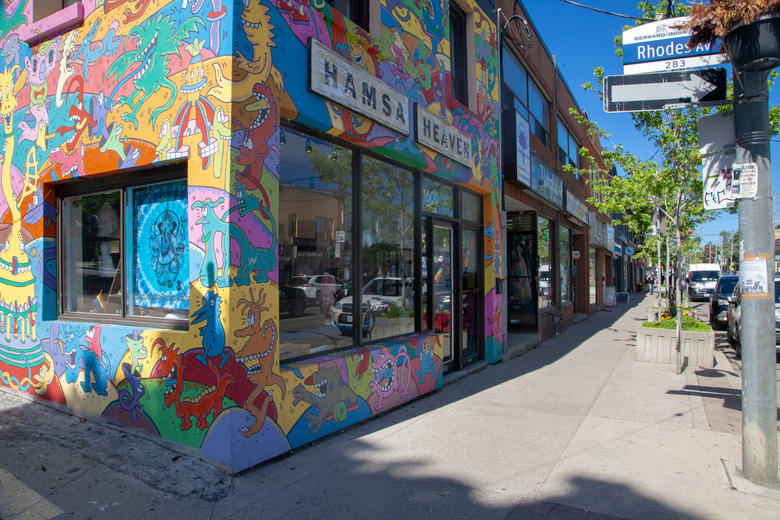 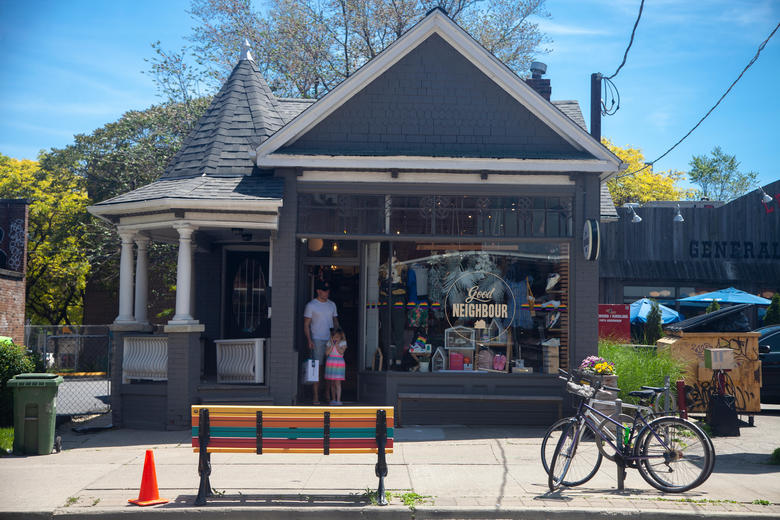 The area on Gerrard Street East between Greenwood Avenue and Coxwell Avenue is known as the 'India Bazaar'. This is the commercial centre of Toronto's East Indian community and also the largest ethnic market of Indian goods, fashions, fabrics, jewellery and food in North America. The smell of incense and the sound of music provide an exotic backdrop to the shops on this street. The clothing stores sell imported silk fabrics, and the restaurant vendors barbecue spicy corn on the cob out on the sidewalk. 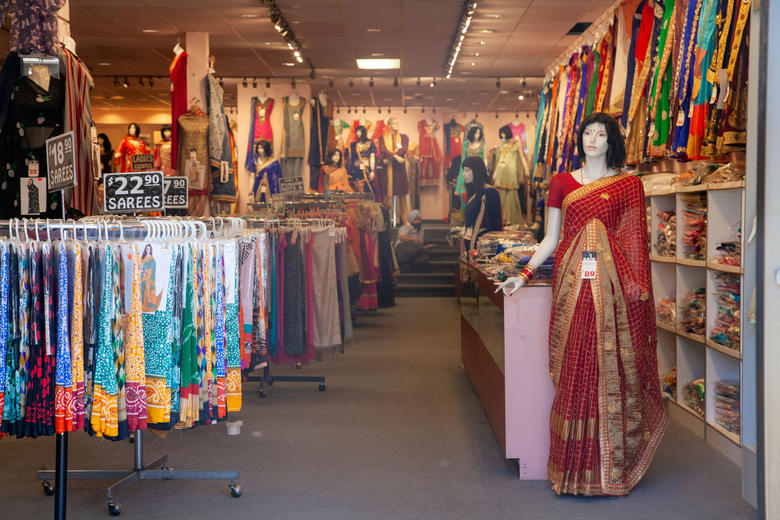 When the weather is warm locals support Ontario’s own farmers and food businesses at the Leslieville Farmers' Market, each Sunday from 9 AM – 2 PM in Jonathan Ashbridge's Park. The market is open from late May through the end of October and moves inside the Redwood Theatre for the winter months. Come home with baked goods, ethically raised meats, prepared meals, and more. Stay for the live bands, community garden, kid-focused programming, and get to know your fellow neighbours.